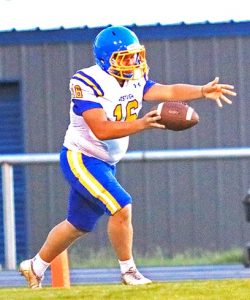 Westview Charger Punter Jackson Abel had two punts for 77 yards during the team’s match-up with the McNairy Central Bobcats Friday evening when the Chargers brought home a win. Photo by Clinton Smith

MCNAIRY CENTRAL (September 4) – Westview is currently 3-0 for the season after the team’s win against the McNairy Central Bobcats Friday, September 4, with a final score of 35-13.

Westview has much of its win from Ty Simpson’s two touchdowns. Simpson had 10 carries for 66 yards in Friday’s game. He also passed for almost 200 yards. Javion Goins caught the most against McNairy Central with four catches for 64 yards and making one touchdown. Cade Spaulding made a touchdown for 32 yards as well. Simpson did throw one interception, but it not stop the Chargers from continuing their winning streak.

On the defense, the Chargers stopped McNairy Central in its tracks. Marquez Taylor had nine tackles with three being for a loss and one sack. Also with nine tackles was Quincey Hamilton who also had three pass break ups. Drew Shanklin finished the game with four tackles, two being unassisted, and a tackle that caused a loss on the play.

Punting Friday was Jackson Abel, who had two punts for 77 yards.

Westview concluded its game with 121 rushing yards and 193 passing yards with 35 points. This is in comparison to McNairy Central’s total 310 yards and only 13 points.

The Chargers hope to continue their winning streak with their away game against Obion County on Friday. Kickoff is at 7 p.m.