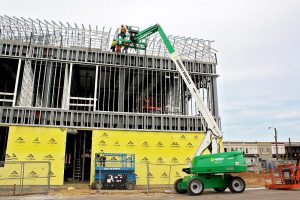 Construction of the Martin Public Library is on track, with an expectation the project will be completed in the Spring or early Summer of next year. Photo by Sabrina Bates/The Enterprise

MARTIN (August 25) — When asked about the status of the Martin’s library project, Martin Public Library Foundation President Dr. Nick Dunagan said, “Construction is on schedule and we see substantial completion in the March-April time frame and a formal opening in the late spring or early summer of 2021.”

According to Martin Community Development Director Brad Thompson, “Everything is running smoothly.” He states TLM and Associates, Inc. of Jackson, which is the architectural and engineering firm overseeing the $12 million-project, reports there have been cost savings in certain areas, so construction costs may actually come in under budget.

The final cost of the $12 million project will be far less, after deducting donations of $1.5 from the Martin Library Foundation, anticipated cost savings of $400,000, and a $100,000 library grant received by the City of Martin. This amounts to $2 million in savings. The City of Martin will pay the remaining $10 million. These funds are provided by a low interest USDA loan of 2.75 percent.

Thompson says city leaders are attending bi-monthly meetings concerning progress on the library and TLM provides the city with a monthly report.

Martin Mayor Randy Brundige states, the building contractor, Barger Construction, hasn’t had any delays thus far, but that could change due to having difficulty getting materials, as a result of the COVID-19 pandemic.

“We’re building a 21st-Century library, not only for our children, but our grandchildren and future generations,” the mayor noted. He said the advanced technology being installed inside the building enhances educational opportunities for the community. Mayor Brundige stated the new Martin Public Library, which is being built on the site of the former Martin Police station and REED Center building on the corner of University and Lindell streets, will serve as a learning and gathering center.

Regarding the library’s Internet capabilities, Mayor Brundige said, “We’ll have computers with 1 gigabyte per second (Gbps) of service.”

He said there will also be work stations with all types of technology available to the library’s patrons.

“I hope the community sees this as a great thing for the City of Martin,” the mayor said.

“The Martin Public Library Foundation is still raising money,” he added. “This pandemic has slowed the giving down, but hopefully in the next few months, they’ll reach their goal.”

Dr. Dunagan states the Martin Public Library Foundation’s fundraising goal is $1.5 million and current donations amount to $1,325,000. “Our goal is to complete fundraising by the end of the year,” he said.

“The 21st-Century Library will manage access to the best-quality learning, enriching and stimulating resources, and librarians will help patrons find what they need. Libraries can take visitors to countless places that the open internet cannot take them, and librarians can show them how to get there,” Dr. Dunagan said.

“This new facility will be a gathering place for people of all ages. Children will have state-of-the-art facilities to learn, explore and prepare for the future. Tweens and teens will have a special area to develop skills in technology and the arts. The new public library will encourage adults to meet with their friends and neighbors and share ideas in a cozy and comfortable setting, complete with free WiFi and computers.”

Dr. Dunagan states the C.E Weldon Public Library is housed in a 100-year-old classic building originally designed as a post office. It will continue to serve a useful function in downtown Martin.

Thompson says a planning committee will be formed to determine the best use for the old library.. But, whatever it is used for, the City of Martin will continue to own and maintain the structure.

“The new library will be a 21st-Century facility designed to meet community and library needs for the next 50 years,” Dr. Dunagan said.

According to Dr. Dunagan, facilities and areas in the new 21st-Century Library in Martin include:

“The new library will anchor a revived and vibrant downtown that will be a source of pride to citizens, an enhancement to industrial and business recruitment and an incentive to families making a decision where to locate,” Dr. Dunagan said.

“Over 400 people have generously contributed to date. For those who have not contributed and want the library, it is time for them to make their gift. Be a part of this giant step for Martin’s children, teens, high schoolers, young moms and dads, adults and senior citizens.”