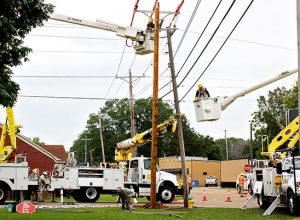 Team members of the Weakley County Municipal Electric System worked throughout the day, Thursday, August 27, to replace a utility pole on Main Street in Martin after it was clipped by a school bus. The repair resulted in an early closure for Martin Elementary School. Photo by Sabrina Bates/The Enterprise

According to Karen Campbell, Communications Director for Weakley County Schools, upon arrival at the schools, per protocol, school nurses checked on the well-being of each passenger. None of the students were injured.

The damaged pole was replaced immediately due to safety concerns.

Martin Elementary Principal Patresa Rogers and staff contacted parents via calls and texts to alert them of the school closure, which occurred at 9:30 a.m.

Principal Rogers said, “That was a big push with us this year. We really stressed having accurate phone numbers. In case we have students with any kind of sickness, we could immediately get in touch with parents.

“I did an all call to the parents,” Rogers said. She stated the teachers also have direct contact information. Additionally, social media and the local radio station were used to ensure all parents were notified.

Rogers states a total of 307 students were dismissed, due to the power outage.

She said, “Everything went very smoothly, thanks to our faculty and staff.” She stated a few extra bus drivers were called in to transport the children to their homes.

Bus riders and car riders were dismissed as normal.

According to Rogers, electrical power was restored at approximately 1:30 p.m.

No other schools were affected by the pole replacement.