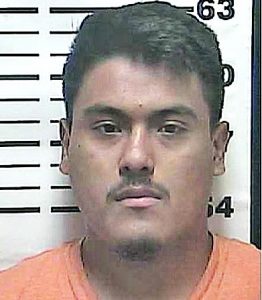 WEAKLEY COUNTY (August 20) — A Georgia man is being held in the Weakley County Jail after he was found with a stolen car.

Nineteen-year-old Eliud Aguirre Hernandez of Austell, Georgia, is charged with theft of property over $2,500, and for being a fugitive from justice.

According to a court affidavit, at approximately 6:45 a.m. Thursday, August 20, Weakley County Sheriff’s deputies James Sanders and Kristen Childress were dispatched to Highway 118 near Austin Springs Road in response to a report of an abandoned vehicle.

A white, Chevy S-10 with Georgia license plates was found abandoned on the side of the road. The front, sides and rear of the vehicle were damaged. The truck also had a flat front tire on the front passenger side where it ran off the road and came to a halt in the ditch.

A check of the tag numbers revealed the vehicle was reported stolen.

While the deputies were on the scene, a passerby stopped and notified Deputy Childress there was a Hispanic male at Triple J’s Wrecker Service trying to get the vehicle towed out of the ditch.

The officers were notified the wrecker service was transporting the man back to the wrecked vehicle.

When Hernandez arrived at the scene, he stated the truck was his and the deputies placed him under arrest.

While being interviewed at the Sheriff’s office, Hernandez admitted to stealing the vehicle and he was “heading north to get away from Georgia and see where the road took him.”

The defendant’s preliminary hearing is December 30, 2020.