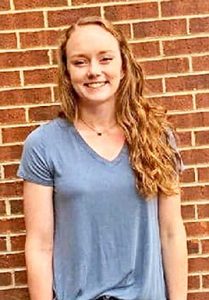 CLEVELAND (August 28) – Carson-Newman’s athletic department has placed 73 student athletes on the Division II Athletics Directors Association’s list for Academic Achievement Awards. Among those is a 2018 graduate of Dresden High School and softball standout, Grace Laws, who is now a sophomore at Carson-Newman University.

“Our mission in athletics at Carson-Newman is to glorify Christ through comprehensive excellence – spiritually, academically, athletically and socially,” Carson-Newman Vice President for Athletics Matt Pope said. “Academic success is something we stress in our program and I am so happy that 73 of our student athletes are receiving the D2 ADA Academic Achievement Award. A grade-point-average is a very personal and rewarding achievement; that is something they have earned in the classroom and we could not be more proud of each of them.”

In order for a student-athlete to receive an Academic Achievement Award, the athletics director of the Division II institution must be a current dues-paying member of the D2 ADA.
Also, the student-athlete must:
· have a cumulative grade point average of 3.5 or higher on a 4.0 scale;
· have attended a minimum of two years (four semesters) of college level work and
· have been an active member of an intercollegiate team during his/her last academic year

Laws is a member of the women’s softball team for Carson-Newman. She is the daughter of Joe David and Jackie Laws of Palmersville.