BY JASMINE WILLIAMS
jasmine@dresdenenterprise.com
GREENFIELD (August 21) — The Greenfield Yellowjackets started their season at home against Scotts Hill. Although the season looks very different this year, the same winning spirit was present during Friday night’s game as the Jackets picked up their first win.
The Jackets started the game with the ball, and in the first minutes, Baker Porter ran for a 25-yard touchdown. Greenfield attempted a two-point conversion, but were stopped by Scotts Hill, making the score 6-0.
Scotts Hill’s time with the ball did not last long as they had to turn over the ball to Greenfield on their 24. However, quarterback Baker Porter threw an interception on Scotts Hill’s 38. Greenfield received the ball again after Scotts Hill was unable to make a first down. The Jackets then recovered their own fumble but turned over the ball to Scotts Hill.
The Jackets were able to break past Scotts Hill’s defense for a touchdown in the second quarter by Keylon Thomas. This time, the two-point conversion was good and brought the Jackets lead to 14-0.
Scotts Hill responded with a touchdown of its own, bringing the score to 14-6.
Near the end of the second quarter, Scotts Hill’s quarterback Kyle Carter suffered an ankle injury, which resulted in him being carried off the field for medical care.
By halftime, the score was still 14-6.
Scotts Hill began the second half with the ball, but turned over to Greenfield after not making a first down. Keylon Thomas ran for the end zone but was brought down by Scotts Hill on the 16. A pass to Kiah Reynolds took the Jackets to the 3 and Thomas ran for another touchdown. Scotts Hill blocked the extra point and the Jackets led 20-7.
The third quarter concluded with neither team scoring, and Greenfield began the fourth quarter with the ball.
The Jackets lost the ball again as Baker Porter threw an interception. However, a fumble by Scotts Hill was picked up by Damian Martin on Scotts Hills 45. The Jackets slowly made their way down the hill and Keylon Thomas made his third touchdown of the night, bringing the score to 27-7. Scotts Hill again was unable to make a first down and Greenfield received the ball.
Greenfield won against Scotts Hill 27-7. The Jackets will play at 7 p.m. Friday, August 28 at Bruceton. 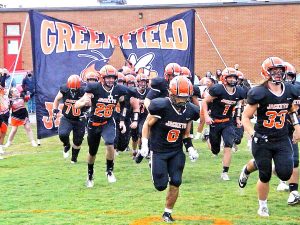 High school football kicked off in Weakley County as the Yellowjackets started their season against Scotts Hill Friday night. 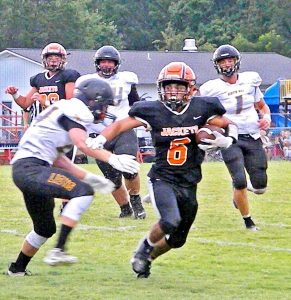 Greenfield’s Keylon Thomas tries to hold off a player from Scotts Hill to make the first down.