WEAKLEY COUNTY (August 19) — An attempted murder charge against a Gibson County man was dismissed in Weakley County General Sessions Court Wednesday, August 19, 2020, after the victim reportedly refused to provide testimony against the alleged shooter.
The charge of attempted first-degree murder was dropped against Malcolm Omar Lee, 18, of Humboldt.
Investigator Captain Randall McGowan of the Weakley County Sheriff’s Department states on May 27, 2020, Canon Magourik, 18 was shot five times with a 9 mm pistol fired through the front door of his parents’ house located in the 1500 block of Union Church Road, just north of McKenzie in Weakley County.
Magourik’s parents and brother were also in the home at the time of the shooting.
The victim was treated at the scene by Weakley County’s Emergency Medical Services and transported to Jackson-Madison County General Hospital. He was later airlifted to a Nashville hospital.
Lee was captured May 29 during a traffic stop in McEwen, Tennessee, along with Katie Nicole Smith of Martin. Smith was charged with being an accessory after the fact for reportedly providing Lee with a vehicle used in his escape. Mary Beth Lyles of Martin was charged with filing a false report after allegedly lying to U.S. Marshals and making a phone call to warn Lee.
Charges against Smith and Lyles were also dismissed in court Wednesday.
According to Assistant Attorney General Colin Johnson, “Magourik refused to testify. We sat down and had a conversation and he said he was not interested in testifying. He gave no rhyme or reason. He just said he wasn’t going to testify, so we really didn’t have any other option but to dismiss the case. He was the only one who could identify the shooter. Without his testimony, there was no way to prosecute the case.”
Regarding the decision by the district attorney’s office to also drop charges against the two women involved in the case, Smith and Lyles, Johnson said, “If I can’t identify the shooter, then I couldn’t prove they were assisting Lee in some way and being accessories after the fact.”
“It’s unusual for this to happen, obviously,” Johnson said. “We were disappointed we couldn’t follow through with the prosecution. If additional evidence or other witnesses come forward, or if the victim decides to testify in the future, we still have the ability to pursue the case.” 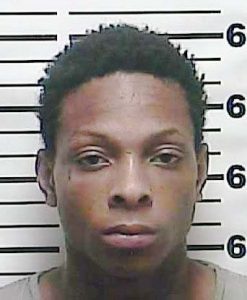 Attempted murder charges were dropped against Malcolm Omar Lee, who was accused of shooting a McKenzie man five times in late May 2020. The decision to drop the case was made after the shooting victim refused to testify.