PORTLAND (August 28) — In Westview High School’s first football game of the season under Head Coach Jarod Neal, the Chargers traveled to Portland to bring home a win. The final score was 47-6.
The Chargers started the game with 21 points in the first quarter. Portland’s only touchdown was in the second quarter, but the team missed the extra point with Lane Peirpoint blocking for Westview.
Ty Simpson passed for 170 yards and three touchdowns. Marquis Taylor and Javion Goins tied for the most touchdowns with two each. One of Taylor’s touchdowns was a 60-yard kickoff return. JT Carver scored nine points from conversion and field goal kicks. Garner Anderson and Cade Spaulding both scored one touchdown.
On offense, Marquis Taylor ran for eight carries, totaling 79 yards. Defensively, Lane Peirpoint led with ten tackles, two unassisted, two tackles for a loss, one interception caught, and the block on an extra point. Hayden Smith and Quincy Hamilton followed with eleven tackles each.
In receiving, Javion Goins led with three catches totaling 106 yards and scored one touchdown.
The Chargers play at Gibson County Friday, August 28. Kick off is at 7 p.m. 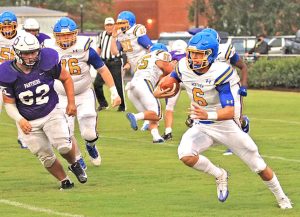 Ty Simpson of the Westview Chargers looks for the first down during the team’s game against Portland Friday evening. 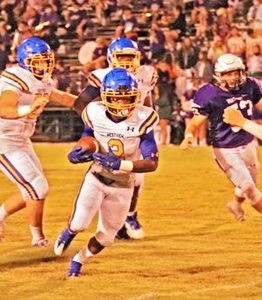