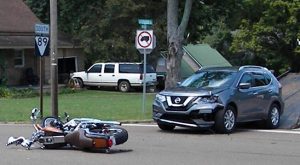 A Henry County motorcyclist was transported to the hospital after crashing into a Sport Utility Vehicle at an intersection in Dresden intersection Monday.

According to an accident report filed by Dresden Patrol Officer Thomas Travis, a two-vehicle accident occurred at the intersection of Broad and Pikeview streets at approximately 1:07 p.m.

The report states sixty-four-year-old Christy F. Dilday of 163 Woodroof Road in Dresden, who was driving a 2017 Grey Nissan Rouge, was stopped at a stop sign on Broad Street. Dilday told police she did not see the motorcycle coming and pulled out onto Pikeview Street. This resulted in the front-left side of the Nissan striking the front end of an eastbound 2006 Harley Davidson – Buell FXS, operated by 24-year-old Austin B. Hoffman of 250 Swan Loop in Buchanan, Tennessee.

Dilday, who was wearing her seat belt, was uninjured in the crash.

All emergency personnel cleared the scene by 2:21 p.m.