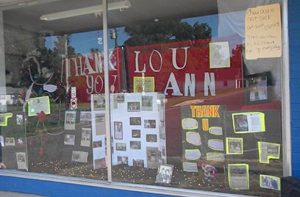 The window at Santa’s Helpers in Dresden was decorated to commemorate the many years of service that Lou Ann Powers has given to helping others. 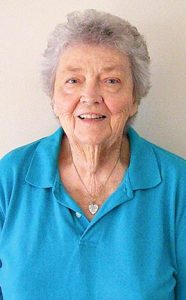 DRESDEN (August 12) – For nearly six decades, Lou Ann Powers has been a pillar of the community with her volunteer spirit and generous heart. Powers of Dresden has served Weakley County for more than 58 years.

Lou Ann Anderson grew up in Dresden on Evergreen Street. She graduated from Dresden High School and UT Martin. After college, Powers moved to East Prairie, Missouri, to teach school in 1962. She was hired two weeks before the start of school and was tasked with visiting families at their home. During those visits, Lou Ann saw that some of the students lived in homes with dirt floors.

Lou Ann began teaching kindergarten and first grade, where she saw many students coming to school without first eating breakfast and without adequate clothing for school. After her first week of teaching, she approached a church for clothing. From that day forward, she would bring snacks for breakfast, and every Friday, donated clothes would go to the students.

Later that same year, Lou Ann started to bring food for the children to take home for dinner.

One student, in particular, she taught lived in a house with a dirt floor, never scored well on tests and was always made fun of. He died in the second grade. After hearing of his death, Lou Ann sent money to the family for a new suit, flowers and to help cover the funeral costs.

When talking about her year teaching at East Prairie, she said, “I was not from a rich family, but I did not know what poverty meant until I went to that school.”

While teaching at East Prairie, she met her husband and became Lou Ann Powers. Together they would visit her students’ families, giving food and clothing.

After teaching for one year at East Prairie, the couple moved to Memphis. There, Lou Ann taught at a school in an area of Memphis known as “Hurt Village.” This area of the city was known for its high poverty, drug, gang and crime rates.

While teaching in Memphis, Lou Ann saw many students were living in poverty. She continued to bring food for the students and had parents privately approach her for children’s clothing. Again, Lou Ann received clothing from local churches for the students.

After teaching in Memphis for a year, Lou Ann and her husband moved back to Dresden. In Dresden was where helping students would eventually become Santa’s Helpers.

Some students she taught did not have enough good clothing for school and some did not practice regular hygiene.

For the next two years, every Friday Lou Ann and her husband started to take the children to shower, receive clean clothes, brush their hair and did the girls’ fingernails. At that time, people in the community heard what Lou Ann was doing for needy students and began donating clothing.

In the late 1960s Lou Ann, along with other teachers, began the after-school program in Dresden.

As the after-school program started, Lou Ann was given a closet in the Dresden school to store donated clothing and toys. Later, she was gifted a storage unit in Dresden for more storage space. In 1971, Lou Ann began to give Christmas gifts to families in need.

Lou Ann made sure no family felt ashamed or insulted for receiving gifts for their children.

Lou Ann said, “It is never to insult a family for their financial situation. But it’s to help those during Christmas, which is a time for helping and giving back.”

Every year, the sponsoring of children during Christmas helped more families in need.

Lou Ann continued to help children throughout the year. After the construction of the new Dresden Elementary and Middle schools building, she and fellow teachers came together for a playground. The school had no playground for the students and the teachers held many fundraisers to have one built.

Lou Ann said there were many years when more than 500 children would receive clothing and toys through donations and sponsorships.

Lou Ann retired after teaching in Tennessee for 41 years but continued what she started in her first year of teaching in Missouri through Santa’s Helpers.

Over the years, Santa’s Helpers has experienced a decline in the number of children being sponsored during Christmas due to many organizations in the county starting fundraisers of their own.

There have been occasions where homes have burned and Lou Ann would give the family clothes, toys and food. Santa’s Helpers also receive calls, on short notice, from foster families in need of clothing and toys.

If anyone requires assistance or requests more information about volunteering, contact Santa’s Helpers through Facebook or at 731-364-3130.

Lou Ann hopes to continue Santa’s Helpers for as long as possible. She has never received any compensation for what she does for the community and will do all she can to help others.

One thing she hopes will change in the coming years is the stigma of asking for help and receiving donations saying, “I don’t want anyone to feel embarrassed to ask for help.”

Tammie Vasquez, a frequent volunteer at Santa’s Helpers for 11 years said, “Lou Ann is a blessing to everyone and we love her very much. I am so proud to call her my friend and family.”

It is unknown the true number of people helped by the actions of Lou Ann Powers and Santa’s Helpers, but those thousands she helps always come with little, or on a rare occasion, at a very small price.

She always had felt a need to help others around her. Lou Ann said she grew up with enough food and clothing. Witnessing children in need inspired her to help in any way she could, from 1962 to this very day.

The Dresden Enterprise is highlighting members of the Weakley County community who goes above and beyond in public service. This can be a teacher, neighbor, business owner or someone who is working to make Weakley County a better place. Person of the Month nominations can be made to the Dresden Enterprise office for consideration via email at enterprise@dresdenenterprise.com or by calling 731-364-2234.