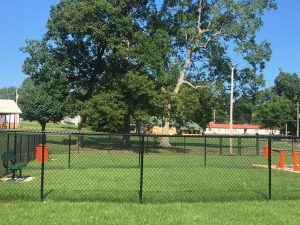 Work on Gleason’s dog park is near completion and will soon open.

Terrell reported a recent smoke test identified several leaking sewer line pipes. A sewer camera is needed to pinpoint the locations. He explained, if a contractor is told to dig to the sewer line at a certain location based on the smoke test and there is no leak, additional holes must be dug to find the leak. This extra work costs the city money that could be saved if the exact location is known, utilizing a sewer camera.

To illustrate the extent of maintaining the city’s sewer system, he stated the main sewer lines alone, not counting the lines that branch from it, are approximately 11.9 miles, or 82,232 linear feet in length.

Terrell informed the board a brand new sewer camera costs approximately $90,000, which is more than the city can afford. However, Terrell said he contacted various suppliers of sewer cameras and found a vendor who sells refurbishes units for approximately half the price of a new camera.

City Recorder Angela Hunt reminded the aldermen anything more than $5,000 must be competitively bid, to which board members agreed to accept bids for a used sewer camera.

Gleason Alderman Jim Phelps reported work on the city’s new dog park is coming along nicely and once the signs are installed, gates will open to allow public access. The lighted facility features watering stations for the pets. He suggested any leftover funds from the dog park grant be used to purchase playground equipment for dogs. Phelps said the octagon table made to seat pet owners needs to be painted orange in keeping with Gleason School colors.

Charles Anderson, representing the Gleason Downtown Revitalization Committee, informed the board the city did not receive grant funding to convert the interior of the train caboose into a mini-museum, because the railroad refused to approve the attraction so close to the railroad tracks. However, Anderson stated the caboose can still be made into a static attraction the public can view from outside. Before this happens, the exterior of the caboose must be refurbished and painted. Anderson said the museum could be installed at another location at a later date.

Another effort to improve the appearance of the City of Gleason involves having landowners repair or raze dilapidated houses currently in violation of city codes. Gleason Police Chief Paul Eddlemon, who serves as the city’s code enforcement officer, reported progress made at some locations but singled out a couple of houses he recommends be condemned. They are: the residence owned by Rick Mead of 305 Phelps Street and a property owned by Chris Mayo at 117 Vincent Street. The board instructed Eddlemon to send another registered letter to the two property owners requesting their presence 30 minutes prior to the next board meeting.