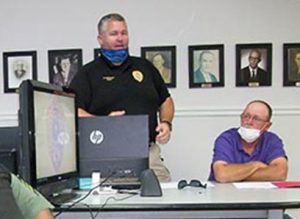 During the Thursday, August 13, 2020, Gleason Board meeting, Gleason Police Chief Paul Eddlemon explains how e-Citation, an electronic citation data management system, will save his department a substantial amount of money over the course of one year.

GLEASON (August 13) — The Gleason Board approved the first reading of an ordinance specifying the dates and times fireworks can be used inside the city limits during Thursday night’s regular monthly meeting at city hall.

Fireworks are also allowed December 31 through January 1, between the hours of 8 p.m. and 1 a.m.

The detonation of fireworks at other times is prohibited.

According to Gleason Deputy Fire Chief, the use of fireworks can also be prohibited if a burn ban order is in effect during these dates.

Violators of this ordinance shall be subject to a $50 fine for each occurrence.

An ordinance amending Gleason’s municipal code to adopt the utilization of electronic citation (e-Citation), regulations and fees was approved on first reading.

E-Citation is an automated form of creating and issuing citations to offenders and collecting the related data.

“We now have iPads in our cars we use to write citations,” Eddlemon said. He states officers can have a motorist electronically sign the citation and print it for the motorist. The citation is then digitally transmitted to a server housed at Gleason Police Department.

Advantages of e-Citations include being a faster and more efficient way to generate reports and citations in the patrol vehicle. Capturing driver’s license information electronically by scanning the driver’s license barcode, and, or barcodes from registrations or other forms, officers can complete their reports easily and quickly and reduce errors.

Hand writing citations is very time consuming and officers jeopardize their safety by spending too much time curbside using a manual process. Handwritten citations can take 15 to 20 minutes or longer to complete. Using an electronic citation process, the average time of stop, data run and ticket entry is between four to five minutes. This gets officers off the curb quicker and back on patrol, keeping their communities safe. It also eliminates illegibility errors and reduces dismissals.

Moving to an error-free citation system drastically reduces the number of illegible tickets.

Eddlemon said Martin is the only other city in Weakley County with electronic ticketing. “We’re constantly improving and making the City of Gleason safer for local citizens,” he noted.

In other board action, members approved the first reading of an ordinance amending the City of Gleason’s municipal code “to establish reasonable court costs.” The court costs vary depending on the offense. According to Eddlemon, the resolution increases court costs from $90 to $100 for all citations.

However, Eddlemon noted the cost for driving school is higher than other local municipalities. He said it costs violators a $90 fine and another $90 in court costs, totaling $180. Eddlemon recommended lowering driving school to a flat $150 for the fine and court costs.

Upon final passage, the resolution stipulates the average total cost for traffic-related offenses is $168.75. This includes a $50 fine, $13.75 litigation tax, $100 in court costs and a $5 electronic citation fee.

The average total cost for most other offenses, including public intoxication, disturbing the peace, anti-noise violation, littering, and violation of the leash law, is $155.

All ordinances will have a second and final reading during next month’s meeting of the Gleason Board of Mayor and Aldermen.