The engagement and forthcoming wedding of Ashton Brooke Pence and Reece Thomas Montgomery are announced this week by the bride’s parents, Chris and Kristi Pence of Greenfield. The prospective groom is the son of Zac and Kim Montgomery of Gleason.
The bride-elect is the granddaughter of Barbara Pence of Greenfield and the late Charles Pence. She is also the granddaughter of Linda Stokes of Fulton, Kentucky and the late Charles Murphy of Hickman, Kentucky.
She is a 2014 graduate of Greenfield High School and a 2018 graduate of the University of Tennessee at Martin, where she obtained a Bachelor of Science degree in Business Administration with an emphasis in Accounting. While at UTM, she was a member of Alpha Omicron Pi sorority. She is currently employed in the loan department of Greenfield Banking Company.
The groom-to-be is the grandson of Diane Borneman of Gleason and the late Bill Borneman; and the late T.W. and Jerusha Montgomery of Gleason.
Montgomery is a 2014 graduate of Gleason High School. He attended Jackson State Community College and is employed by the Weakley County Highway Department in Dresden.
The couple will exchange vows September 5, 2020, at Waddell Place in McKenzie. Music begins at 5:30 p.m., with a ceremony to begin at 6 p.m. A reception follows at the wedding site.
Upon returning from their honeymoon in Gulf Shores, Alabama, the couple will make their home in Greenfield. 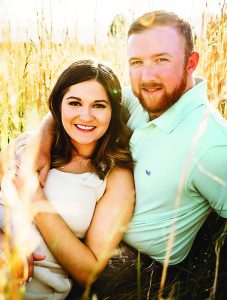