BY DAVID FISHER
david@dresdenenterprise.com
WEAKLEY COUNTY (August 7) — Former Weakley Countian, Jack Baltz, a nurse practitioner and an intermittent employee with the U.S. Department of Health and Human Services under the National Disaster Medical System (NDMS) with TN-1 Disaster Assistance Medical Team (DMAT), shared his story about his participation battling the COVID-19 emergency in Texas.
The team, consisting of one medical doctor (MD), four advanced practice practitioners (APP) and nurse and paramedics, reported to the Medical Center in Texas Monday, July 13, 2020. The Federal Emergency Management Agency (FEMA) brought in critical care nurses from around the country to help with staffing.
According to Baltz, now a resident of Nashville, the hospital, located in Corpus Christi, Texas, requested assistance from the federal government. The hospital has a capacity of 325 patients with two Intensive Care Units (ICU), which contain 50 beds and intended to treat a maximum of 50 patients. The Level 2 Trauma Center is utilized to train residents for medical school.
Approximately 10 days before the team arrived, the center had four COVID-19 positive patients. By the time they began their duties, the medical facility was overrun with COVID-19 patients. They were immediately given a pair of scrubs and patient assessments.
The hospital was over-capacity with 423 patients; 250 were COVID-19 positive and 150 were Intensive Care patients. There were 54 patients on ventilators. The medical doctor and other advanced practice practitioners were assigned to other areas of the hospital, he noted. The hospital designated five additional areas as ICUs on three floors, scattered among three different buildings. Baltz was stationed in the hospital’s fourth makeshift ICU in the basement, where there were 40 ICU patients being held awaiting ICU beds. Added to this, was a waiting list from surrounding hospitals desperate to send patients to a hospital where more resources existed.
Joshua Baltz, son of Jack Baltz, a nurse practitioner with NDMS’ Disaster Medical Assistant Team in Tennessee (DMAT-TN1) said, “When my dad called me, my heart began to pound. He said, ‘I lost count of all the code blues today.’ I had never heard him so tired, fearful, or overwhelmed.
“I knew that he had deployed with NDMS. He has been running off to disasters for more than 15 years now, ever since seeing the devastation caused from Hurricane Katrina. As a member of the NDMS Disaster Medical Assistance Team in Tennessee he sets up medical tents and triages and treats patients who have survived hurricanes, floods and earthquakes. He was even in Haiti after the earthquake that killed 220,000 people in 2010. He’s seen some of the worst natural disasters recorded in our lifetime.”
Josh, said, “They were doing the best they could, but to say they were overwhelmed was an understatement.”
Jack told his son, “When you walked into the ER you felt like you could almost see the COVID floating in the air.”
Jack states, as soon as one of the advanced practice practitioners walked into his unit, there was a Code Blue on one of his patients. Code White was called for patients who were near death and Code Blue for the ones who were dying.
“During the day, you would hear over the intercom, a code called about every hour,” Baltz said.
“They were all dying alone,” Jack told Josh. Jack said he had to call the wife, son or daughter of the patient and tell them their loved one was not going to make it through the night.
“The nurses held up iPads as the family wailed on the screen saying their goodbyes. When the call ended, the nurse dialed another number and ran to the next room.”
Baltz states, over the course of the two-week mission, the hospital had several providers to become ill with COVID, including the director of ICU and the lead NP of ICU. The hospital had numerous nurses, respiratory therapists and half of the housekeeping staff out with COVID.
Jack stated team members only hydrated before and after their shift because they were too afraid to lift their masks in the hospital. Death was all around them.
On the last day the team was to work in the hospital, Texas was hit with a Category 1 hurricane, Hanna.
Jack commented, “We were so busy with patient care that little thought was given to the hurricane. As a matter of fact, each of the DMAT providers had a code on at least one of the patients we were managing that day. We did not have time to look out the window at the hurricane. Fortunately, the storm caused minimal damage and we were never so happy to finish our 12th day in a row of 14-hour days.”
The DMAT Commander made the comment that it was the hardest deployment they have ever been on.
Jack said, “I can say that we saved lives and made a big difference in the lives of the patients we touched on this deployment. We were replaced by another DMAT team. Then, the Army brought in medical personnel because the hospital was still overwhelmed. The COVID virus is extremely dangerous. It not only attacks the lungs but also causes small blood clots throughout the body. The most vulnerable populations are patients over the age of 60 with underlying conditions like diabetes and kidney disease. It is important to wear a mask if you cannot physically distance yourself and wash your hands.”
Josh said, after serving 14 days of 12-hour shifts, his dad was called up for another next mission. “This is what he is trained to do. It’s his personal call to help others when others are at their most vulnerable.”
“As a federal intermittent employee with NDMS my dad can turn down a deployment, and some providers do because of their regular full-time health care jobs in their own communities,” Josh said. “I know my dad won’t turn them down. If there is a way he can go, if he can make sure his shifts are covered, he will go. He always does.” 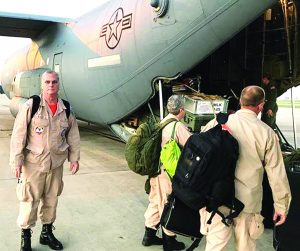 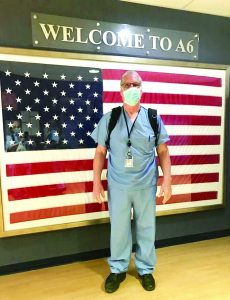 Jack Baltz, nurse practitioner, who previously lived and worked in Weakley County, served on a medical mission at a South Texas hospital overrun with COVID-19 patients. 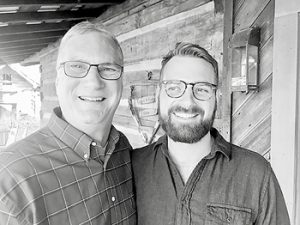 Jack is pictured with his son, Josh, who is also in the medical profession.