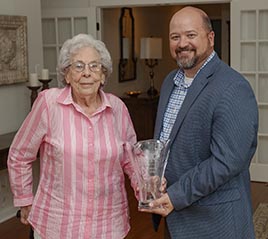 MARTIN (August 11) – The University of Tennessee at Martin and national pioneer for women’s athletics Bettye Giles was presented her Tennessee Sports Hall of Fame award Aug. 11 at the Dunagan Alumni Center.

It was announced February 17, 2020, Giles was part of the star-studded 11-person Tennessee Sports Hall of Fame Class of 2020. The original banquet was set for Aug. 1 but was postponed because of health and safety concerns because of the pandemic. A fully produced virtual induction ceremony is expected to take place soon.

Giles was the primary advocate for women’s equality in Tennessee sports and was instrumental in the development of athletic opportunities for women. She has served on numerous national committees promoting the growth of women’s sports, receiving the Pathfinder Award from the National Association of Girls and Women in Sports while additionally founding and serving as the first president of the Tennessee College Women’s Sports Federation.

A Clarksville, Tennessee, native, Giles started her UT Martin tenure as a professor of physical education in the fall of 1952. That same year, she began the university’s women’s tennis program and served as the head coach for eight years. In 1956, the tennis program became UT Martin’s first women’s sport to achieve varsity status.

In 1969, Giles was entrusted as UT Martin’s first and only director of women’s athletics – a role she would proudly serve in until 1994.

During her time as director, she jokingly convinced a tall, skinny UT Martin freshman from Ashland City, Tennessee, that she had to play volleyball as a “conditioner” for basketball season. That student-athlete was Pat Head Summitt, who went on to become one of the best coaches in the history of basketball, winning 1,098 games and eight national women’s championships at the University of Tennessee.

Giles’ leadership and activism for women’s athletics coincided with the Title IX movement, which was enacted by the U.S. Congress on June 23, 1972. Four years later, the first athletic grant-in-aid scholarship was awarded at UT Martin.

Retired since 1995, Giles remains an avid Skyhawk supporter. She was inducted into the UT Martin Hall of Fame in 1985, and the UT Martin softball program branded its stadium as “Bettye Giles Field” a little over a decade later. During Homecoming weekend of 2012, statues of Giles, Summitt and former UT Martin head women’s basketball coach Nadine Gearin were unveiled outside of the Kathleen and Tom Elam Center on campus.