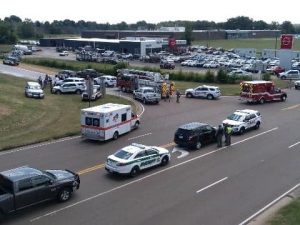 MARTIN (August 6) – Multiple agencies continue to investigate an incident from an apparent pursuit out of Kentucky into Tennessee that resulted in an accident and reportedly shots fired at the scene on an on-ramp off of Hwy. 45 near Weakley County Motors in Martin late Thursday morning.

At approximately 11:40 a.m. on Thursday, August 6, the Fulton County dispatcher notified Weakley County 911 that Kentucky State Police were in pursuit of a newer model Chevrolet Malibu with unknown Florida tags. A multi-agency BOLO was issued for the vehicle and suspect.

The driver allegedly assaulted a police officer in Illinois.

Kentucky State Police continued the pursuit with the driver traveling at speeds of 120 mph.

The Tennessee Highway Patrol reported they were aware of the situation and had a trooper in the area. A video of the incident shows the driver continuing to attempt to leave the on-ramp after he was surrounded by law enforcement personnel. Officers attempted to slow the vehicle by ramming it with an SUV, before the suspect reportedly attempted to leave. Officers opened fire on the vehicle.

Martin Fire Department was paged out for mutual assistance and quickly arrived on the scene near Weakley County Motors in Martin.

EMS was also dispatched to the scene at THP’s request, and informed shots had been fired and a subject was still in the vehicle.

No officers were injured during the shooting.

The occupant of the vehicle was airlifted from the scene by medical helicopter. The other suspect was detained.

The incident stemmed from a traffic stop in Jefferson City, Illinois, when a vehicle occupied by two subjects was pulled over and a K-9 alerted to the vehicle. While a police officer and the driver were outside the vehicle, the passenger, who was reported possibly armed, got in the driver’s seat and took off. As the suspect drove away, he allegedly pushed an officer out of the vehicle. As a result, the suspect is facing a charge of aggravated assault of a police officer.

The Fulton County dispatcher notified local law enforcement officials the vehicle struck one of their officers head on, and requested Weakley County EMS to travel toward Obion County on Hwy 45.

Air Evac landed at the scene at approximately 12:21 p.m.

TDOT was also notified to shut down the on and off ramps at the intersection of Hwy 45 and the Hwy 22 Bypass.

Air Evac treated the patient at the scene for self-inflicted wounds and airlifted him to a regional hospital.

The extent of injuries is unknown. The incident remains under investigation. More details will be released as they become available. Complete story with photos can be found in the Wednesday, August 12 edition of The Enterprise.