MARTIN (July 30) — Students at the University of Tennessee at Martin began moving their personal belongings into on-campus housing for the fall semester Monday, July 27. Students can move on campus until Friday, August 12.
At check-in, students had their temperatures checked and were given a mask if they did not already have one. Students are not allowed to bring more than three people with them to help move in.
Ryan Martin, Assistant Director of Housing at UTM, said approximately 120 students are moving in every day.
Campus housing units are sanitized after move-ins. Students who are moving in must return home until August 13, when they are officially allowed to live in their units. No external guests are allowed on campus.
Martin stated many students are following guidelines very well.
“We appreciate everyone working with us and creating a safe environment for move-in,” Martin shared. 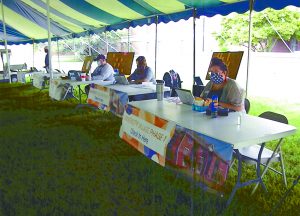 Members of the Housing Department at UT Martin greet incoming students for move-in days that began July 27 and continue until August 12.