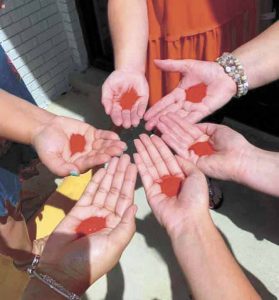 (L to R): Jennifer Gilbertson and Amber Whitten of the Weakley/Obion Counties Center for the Prevention of Child Abuse joined a worldwide movement known as the Red Sand Project to remember the human trafficking victims who fall through the cracks.

BY SABRINA BATES
sabrina@dresdenenterprise.com
An estimated 94 children are suspected of being victims of human trafficking in Tennessee each year. More than 100,000 children are estimated to be exploited in the United States. Worldwide, there are an estimated 40.3 million victims of trafficking annually.
In 2014, New York artist, Molly Gochman, pioneered the Red Sand Project in Miami, Florida. She filled the cracks of sidewalks in and around the Art Basel Miami Beach pavilion with red sand. The grains of sand represented victims of human trafficking, dubbed as a form of slavery, who fall through the cracks.
The movement has expanded from the beaches of Miami to the soybean fields of Tennessee after Gov. Bill Lee last year proclaimed Human Trafficking Awareness Week to coincide with July 30 as World Day against Human Trafficking. The Red Sand Project is recognized in every state, 70 countries and one million participants each year.
Last week, members of the community filled cracks with red sand in front of businesses in downtown Martin and the sidewalk around the Weakley/Obion Counties Exchange Club Carl Perkins Center for the Prevention of Child Abuse.
Center Family Advocate Hailey Williford said the project is related to the services the local center provides for families as advocates for victims who are most vulnerable – children.
Statistics show victims aren’t trafficked by strangers, but someone they know such as family members or romantic partners. More than 90 percent of children who are commercially-sexually exploited have been sexually abused in their past. The average age of entry into the commercial sex industry is 13.
The Tennessee Department of Health works with agencies and businesses for participation in the Red Sand Project. Locally, Chelsea White of the Weakley County Health Department spends time getting bags of red sand to those wanting to bring to light victims who fall through the cracks. Along with the Carl Perkins Center, organizations such as Weakley County Prevention Coalition and Project 731 team up to fill the gaps in sidewalks in recognition of those victims.
Community members are encouraged to recognize the red flags and risk factors for human trafficking. Significant risk factors include recent migration or relocation, substance abuse, mental health concerns, involvement with the child welfare system and runaways or homeless youth. Traffickers often identify and leverage their victims’ vulnerabilities in order to create dependency.
To report suspected human trafficking, use the National Human Trafficking Hotline by calling 1-888-373-7888 or text 233733. The Carl Perkins Center offers a program to train adults to recognize the signs and help intervene to curb the progression of commercial exploitation. Contact the Center at 731-587-0768 to schedule a training for a group or organization. This year, Lorna Benson with the Weakley County School System has partnered to help provide training sessions for high school teachers.
The Red Sand Project has a social media presence for those wanting to participate by filling cracks with red sand and using the hashtags #RedSandTN and #ItHasToStop.