BY JASMINE WILLIAMS
jasmine@dresdenenterprise.com
SHARON (July 23) — The City of Sharon is in the end stages of fully relocating its city hall from East Main Street downtown to 5320 US Highway 45. The new location was once a medical clinic for the city and houses Sharon City Hall and the Sharon Police Department.
City Hall offers amenities to residents and city workers not available before. These include a larger parking area, handicap accessibility, a board meeting room, and extra storage for the city. One of the newest amenities is the installation of a drive-through dropbox. At the old city hall, a dropbox was available but residents had to leave their vehicles to use it. The city now has a dropbox residents can walk up to or drive-through to make payments to the city. There have been many positive responses from those who use the new dropbox without leaving their vehicles.
The move to the clinic building began when the city hall required renovations. The police department also had to pay rent at its former location on East Main Street. However, the police department did not pay for utilities.
The Sharon City Board met and discussed the need for a new location. The former clinic came up in discussions and was purchased for $25,000. Having the city hall and police department in the same building initially saves $5,000 a year on rent payments. With the added cost of utilities for the police department, the city is breaking even.
City Recorder Donna Stricklin stated even though the city is not saving a significant amount of money from the move, the added amenities and storage are well worth the move.
Both departments find being in the same building is very convenient for city workers and residents. Stricklin noted how the police department issues tickets and city hall where residents pay tickets. She said people can pay traffic tickets in the same building and save time.
Sharon Police Chief Troy Whitworth also commented on the move. Whitworth said the department has extra room for offices and evidence. The department updated its reporting system after the move and received new computers, which has made the department more efficient.
The city has not finished the relocation; there is still equipment that will be moved from the East Main location. There are suggestions of installing rails for the drive-through dropbox to help better navigate drivers around the building. Installation of a new city hall sign and a flag pole are under discussion to complete the project. 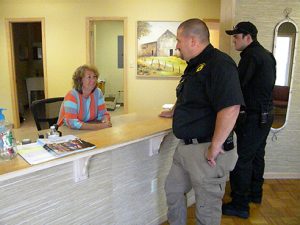 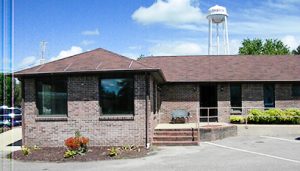