WEAKLEY COUNTY (July 19) — A single-vehicle accident in rural Weakley County resulted in the patient being airlifted for treatment at a regional hospital.
At 3:25 p.m. on Sunday, July 19, a 2008 Honda motorcycle traveling north on Old State Route Hwy 22 ran off the right side of the roadway near McKenzie, struck a tree and overturned. The victim, 27-year-old Frank Trojan of Jackson, was thrown off the motorcycle by the impact and sustained multiple injuries.
Weakley County EMS responded to the scene to provide medical assistance. The rider was transported by ground ambulance to a helicopter landing pad at the former McKenzie Hospital, where the patient was flown to a regional hospital by medical helicopter.
The accident was investigated by the Tennessee Highway Patrol.
Weakley County Sheriff’s deputies also worked the accident, providing traffic control.
All emergency personnel cleared the site of the accident at approximately 6:30 p.m. 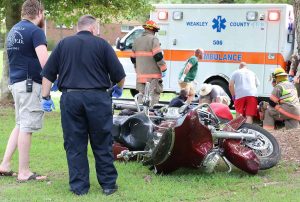 A Jackson man was airlifted to a regional hospital, following a single-vehicle motorcycle accident near McKenzie.