McKENZIE (July 14) — Bethel Coach Chris Nelson announced Tuesday the addition of Emanye Robertson to his coaching staff. The former UT Martin standout will serve as a graduate assistant with the Lady Wildcats.
Before attending UTM, Robertson was a TSSAA All-State performer at White Station High School in Memphis. Robertson excelled with the UT Martin Skyhawks, being named MVP of the team in 2019. She was named to the OVC First Team and captured the OVC Defensive Player of the Year. Robertson was also named to the league’s all-tournament squad.
She is a member of the White Station and UTM 1,000 Point Clubs.
“We are excited to add Emanye to our coaching staff. She is a proven winner and comes from a championship  program where we know fundamentals and mental toughness is held to a high standard,” Coach Nelson said. 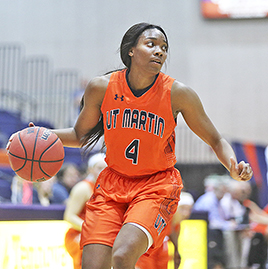