By Brittany Martin
brittany@mckenziebanner.com
NASHVILLE (July 28) — Nearly eight months into a global pandemic and as far as Tennessee is concerned, the positive case count has not slowed, but grown exponentially. Predictions of a sudden cease fire from this pathogen on November 3, 2020 seem more unlikely every day.
One month ago, on Monday, June 29, 2020, Tennessee had 42,297 cases of COVID-19, 592 dead from the disease, and 2,599 hospitalized. On Monday, July 27, 2020, there were 96,489 cases in the state, 978 dead, and 4,280 hospitalized. In four weeks, that’s a difference of 54,192 cases, 386 more Tennesseans dead, and 1,681 more hospitalized. Just in the last 7 days, Tennessee has tacked on 16,735 positive cases, 131 have died, and 568 more were hospitalized.
The Tennessee Department of Health was experiencing technical difficulties on Tuesday. The only information available at press time was the statewide case count, 99,044. That is an increase of 17,100 cases in the state since last Tuesday.
In Carroll County one month ago, there were 39 cases, Monday there were 139 cases, with two deaths. Of the 139 total cases in Carroll County, 89 are active (infected and contagious right now). Carroll has reported 59 new cases in the last seven days.
In Weakley County one month ago, there were 56 cases, Monday there were 165, with two deaths. Right now, there are 103 active cases in Weakley County. Weakley has reported 64 new cases in the last seven days.
A confined facility in Dresden reported four positive residents and two positive staff, one resident died and three recovered. A confined facility in Martin reported two residents and two staff with COVID-19, both residents have recovered.
In Henry County one month ago, there were 42 cases, Monday there were 115 with one death. Of the 115 cases, 56 are active right now. Henry County has reported 52 new cases in the last seven days.
A confined facility in Henry County reported two residents and six staff that tested positive; according to the Tennessee Department of Health website, both residents have recovered.
As of Tuesday, In the United States, 4,280,135 cases have been reported with 147,672 deaths. Globally, 16,341,920 cases have been reported since December 31, 2019, and 650,805 have died from the disease.
According to the Centers for Disease Control (CDC), COVID-19 patients can suffer a wide variety of symptoms, the most common are: fever, cough, and shortness of breath. Other symptoms may include: fatigue, muscle or body aches, headache, loss of taste or smell, sore throat, congestion, runny nose, nausea, vomiting or diarrhea. A recent CDC study of patients aged 18-34 years revealed that 1 in 5 previously healthy young adults weren’t back to usual health in 14 to 21 days after testing positive.
State and health officials urge citizens to wear face coverings in public places; keep 6-feet distance from others; wash your hands for 20 seconds; use hand sanitizer when you can’t use soap and water; don’t touch your face — especially after touching potentially infected surfaces; wipe down high-touch areas with disinfectant often; and avoid heavily congested public places whenever possible.
Some places require guests to wear face coverings while in their facility.
On December 31, 2019 China reported a mysterious pneumonia to World Health Organization officials. The mysterious disease was identified as a coronavirus on January 7, named Coronavirus Disease 2019 (COVID-19) on February 11 and declared a pandemic (meaning worldwide spread) on March 11, 2020. Tennessee reported its first case on March 5, 2020.
It may seem like just numbers, but behind those numbers, are real people struggling to breathe and missing their loved ones. The pandemic has affected every person on the planet in some way: financially, economically, physically, or emotionally. The only way to end it is to work together. Please protect yourself and stay well.
For more information, go to https://www.tn.gov/health/cedep/ncov.html 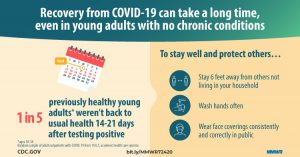 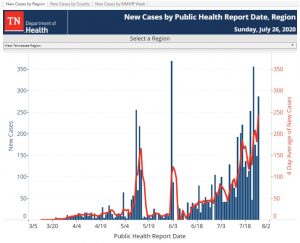 Reported data from the Tennessee Department of Health for the West Tennessee region, updated Sunday, July 26.