Early voting has begun in Weakley County. During the first three days of early voting, 782 citizens cast their ballots. Of the total, 180 ballots are mail-in (absentee) votes and 68 ballots cast by nursing home residents. Republican ballots cast as of Monday totaled 579. There are 192 Democratic ballots cast and 11 voters chose not to cast a ballot for the primary election.
The August 6 ballot includes state/federal primaries and a county general election
For the State Republican Primary, there is one seat open for the U.S. Senate, one seat for U.S. House of Representative, one seat for the Tennessee Senate District 24, and one seat for the Tennessee House of Representative District 76. For Weakley County’s General Election, County Commission seats for District 5 and 7 are on the ballot, as well as Assessor of Property. There are multiple seats for School Board members including; District 1, 3, 5, 7, and 9. Finally, Constable District 1 and District 5 is on the ballot this year.
The Democratic State Primary, the U.S. Senate seat, and the U.S. House of Representative seats are up for election. The Tennessee Senate District 24 and 76 are on the ballot but has no qualifying candidate listed.
Voters in Weakley County have two early-voting polling locations. The Dresden Election Commission Office and the Masonic Lodge in Martin offer early voting until August 1 for early voting. Hours for the Dresden location are Monday through Friday from 8:30 a.m. to 4 p.m. The Martin location will be open Thursday and Fridays from 8:30 a.m. to 4 p.m. Both locations will be open every Saturday from 8:30 a.m. until NOON during the early-voting period. 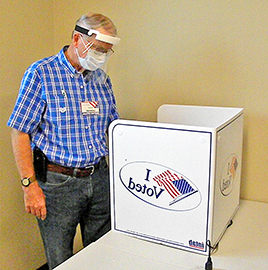 Poll worker Richard Lemonds sanitizes a polling booth at the Weakley County Election Commission Office in Dresden to prevent the spread of germs. The Commission is open for early voting through August 1. It is open Monday through Friday from 8:30 a.m. to 4 p.m. and Saturday 8:30 to NOON. 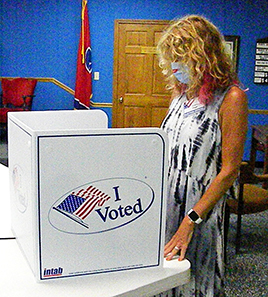