BY JASMINE WILLIAMS
jasmine@dresdenenterprise.com
MARTIN (July 17) — The Black Student Association and the Skyhawks for African-American History hosted a demonstration on the UT Martin campus in front of the administration building Friday afternoon. Students participated in the peaceful demonstration for a required African-American history course at the university and in response to a controversial video that recently circulated on social media.
Despite the weather, several students came in support of the demonstration.
A formal proposal was sent to the university. In it every student will have to take one class regarding African-American history and culture. Hailey Williford, a member of the Skyhawks for African-American History, said there are many courses a student could take to fulfill this requirement. Race and psychology, African-American history, and African-American literature could all be used for this requirement. Williford said the reason students need an African-American history course was, “There are black students who don’t know their history and white students who don’t know black history. We feel it’s important to have students to be ready for a diverse world.”
The proposal was sent and is under review by the university. If approved, it would go into effect as soon as the fall of 2021.
The demonstration was also in response to a controversial social media video. Those who participated in Friday’s event said they wanted to show racist comments and actions would not be tolerated on UT Martin’s campus. “We need allies and people to be there for black people,” president of the UTM’s Black Student Association Kaylyn Bailey stated. 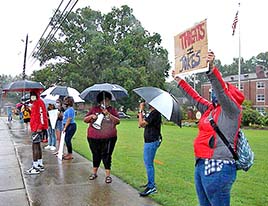 Students gathered in front of the Administration Building on the UT Martin campus Friday afternoon to rally for a mandatory African-American course and for accountability.