NASHVILLE (July 16) — Last week, Marsy’s Law for Tennessee presented State Senator John Stevens of Huntingdon with the Champion of Victims’ Rights Award for his dedication to protecting the rights of crime victims in the Tennessee General Assembly.
State Representative Patsy Hazlewood of Signal Mountain also received the award.
“We couldn’t ask for better advocates for Marsy’s Law in the General Assembly than Senator Stevens and Representative Hazlewood,” said Marsy’s Law for Tennessee State Director Bonnie Brezina. “Their passion and concern for victims and their commitment to ensure crime victims have equal rights to those accused means so much to the thousands of survivors and families in Tennessee who fall victim to crime every year.”
Brezina, Victims Outreach Director Marianne Dunavant, and other Marsy’s Law for Tennessee team members presented the award Thursday afternoon in the lawmakers’ offices in the Cordell Hull Building in Nashville.
Senator Stevens and Representative Hazlewood have both endorsed Marsy’s Law for Tennessee — a law that will ensure that victims of crime have equal, constitutional rights on the same level as those accused and convicted of crimes — and sponsored the bill in the 111th General Assembly that was cut short due to COVID-19.
“It’s an honor to be recognized as championing a cause that’s so important to Tennesseans,” Stevens said. “We will do everything in our power to see that victims of crime have equal, constitutional rights,” he added.
Adopting Marsy’s Law in Tennessee will provide victims with the ability to assert the critical rights to which they are promised including:
• The right to be treated with fairness for the victim’s safety, dignity, and privacy;
• The right, upon request, to reasonable and timely notice of, and to be present at, all criminal public proceedings and all juvenile delinquency proceedings involving the accused;
• The right to be heard in any proceeding involving release, plea, sentencing, disposition, and parole, as well as any public proceeding during which a right of the victim is implicated;
• The right to be free from harassment, intimidation, and abuse throughout the criminal justice system, including reasonable protection from the accused or any person acting on behalf of the accused;
• The right, upon request, to reasonable notice of any release or escape of an accused;
• The right to refuse a request by the defendant, the defendant’s attorney, or any other person acting on behalf of the defendant for an interview, deposition, discovery request, or other communication with the victim;
• The right to full and timely restitution from the offender;
• The right to a speedy trial or disposition and a prompt and final conclusion of the case after the conviction or sentence;
• The right, upon request, to confer with the prosecution;
• The right to be fully informed of all rights afforded to crime victims.
For more information, visit marsyslawfortn.com.
Marsy’s Law is named after Marsalee “Marsy” Nicholas of California, who was stalked and killed by her ex-boyfriend in 1983. Only one week after her death, Marsy’s mother and brother, Henry T. Nicholas, walked into a grocery store where they were confronted by the accused murderer. The family, who had just come from a visit to Marsy’s grave, was unaware that the accused had been released on bail.
In an effort to honor his sister, Dr. Nicholas made it his mission to give victims and their families constitutional protections and equal rights. He formed Marsy’s Law for All in 2009, providing expertise and resources to victims’ rights organizations nationwide. 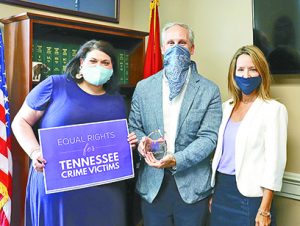