BY JASMINE WILLIAMS
enterprise@dresdenenterprise.com
MARTIN (July 14) — The University of Tennessee at Martin Athletics Department hired a familiar face from Weakley County to join its women’s basketball program.
Willie Trevathan is leaving Greenfield High School after 19 years to work as an assistant coach at UT Martin.
In an announcement by UT Martin athletics, head coach for the women’s basketball team Kevin McMillan noted he was very excited for Trevathan to join his coaching staff.
“I am very excited to add a coach of Willie’s caliber to our program,” McMillan said. “Not only is Willie a great friend; he has proven to be a great leader and coach. His philosophy and character will fit seamlessly into the culture of our program,” he added.
Trevathan begins coaching Aug. 1 for the 2020-21 basketball season.
McMillan contacted Trevathan about the assistant coaching position. Trevathan will work exclusively with UT Martin and solely have an assistant basketball coach position.
Trevathan remarked about leaving Greenfield and what the years of support meant to him.
“I want to thank the leadership in the Weakley County School System. All the teachers and staff I worked with and all those in the Greenfield community. I want to thank them for their support and I am going to miss them all.”
He thanked his family and those in the UT Martin system who helped him gain his new position.
Trevathan said he knows the girls’ basketball team in Greenfield is on a solid foundation and will be able to achieve the same accomplishments as they have in the past, no matter who takes the head coach position.
While at Greenfield, Trevathan led the Lady Jackets basketball team to many accomplishments. In 2018, the Greenfield Jackets girls’ basketball team won its first state title since 1979. The following two seasons also saw the Lady Jackets make appearances in the state tournament.
At the 2018 State of Tennessee Girls Basketball tournament, Trevathan was named the Coach of the Year and All-West Tennessee Coach of the Year. The decorated coach claimed seven district Coach of the Year honors during his tenure.
He led the team to 383 wins and 160 losses while at Greenfield, a percentage of 70.5.
Overall, Trevathan’s teams made three consecutive state tournament appearances from 2018-2020 while boasting five appearances overall — including four as a girls basketball coach (2006, 2018, 2019, 2020) and one time as a boys basketball coach (2004).
During the 2019-20 season, the Lady Jackets were 34-0 and in the TSSAA Class A state semifinals before the COVID-19 pandemic abruptly ended the tournament and the season. No announcement has been made regarding who is Greenfield’s next head coach for the girls’ basketball program. 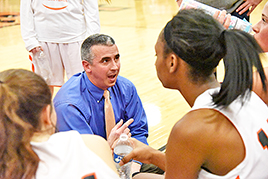