BY DAVID FISHER
david@dresdenenterprise.com
GLEASON (July 21) — A fundraiser is being held for a 25-year-old Gleason truck driver, who underwent surgery earlier this month to remove a brain tumor.
Will Nanney is the sole provider for his family, which consists of his wife, Ginger, and their three children — eight-year-old Dallas, four-year-old Kalli and one-year-old Oakley.
To help Will’s family during this difficult time, a barbecue plate fundraiser is noon August 8 at KR Trucking in Gleason. Money raised through the fundraiser, along with donations, will fund trips to the hospital, expenses, medical bills, and everyday expenses for the family.
“On June 26, we were on our way home from a fishing trip when Will went numb on the entire left side of his body,” Ginger says. She states, after taking him to the emergency room in Paris, doctors performed a CT scan to identify the problem and discovered a tumor on the right side of his brain. He was then airlifted to Vanderbilt Medical Center in Nashville.
According to fellow KR Trucking employee and family friend, Brandon Odle, Will underwent surgery July 9. He notes doctors removed 80 percent of the brain tumor and a biopsy is being performed to determine if the mass is cancerous.
Odle says Will was allowed to go home two days after the surgery, but he came down with a 104.9 degree fever and had to return to Vanderbilt. Doctors determined their patient developed a brain bleed. Fortunately, surgeons stopped the bleeding, and he is in good condition.
Odle says Will has worked as a maintenance technician in the shop at KR Trucking in Gleason for the past three years. Because of his medical condition, he is unable to return to work.
Ginger states doctors told the family her husband will have a long recovery period, additional medical appointments and possibly radiation treatment as time goes by. He will be off work for a minimum of two months to recover from the surgery.
“We are asking everyone to reach in their pockets and donate to help the family through this tough time,” Odle said.
For a donation of $10, those supporting the fundraising event will receive a barbecue plate with all of the fixings, including slaw, beans and a bun. Pre-orders are encouraged, so organizers will know how much barbecue to order. Plates may be picked up beginning at 12 p.m. at KR Trucking, located at 236 Summer Street, Gleason, Tennessee.
For those just wishing to donate money, the family has a Venmo and PayPal set up and a GoFundMe page on Facebook at https://gf.me/u/ydgwt;
Venmo- @Ginger-Nanney; or Paypal- https:www.paypal.me/gmpnaney.
For more information, contact Odle at 731-819-7784 or Kyle Thamason at 731-293-1263. 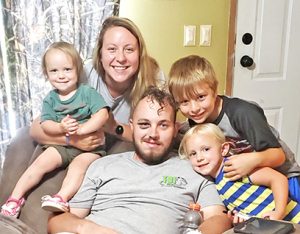 Will Nanney and wife, Ginger, are pictured with their three children — one-year-old Oakley, eight-year-old Dallas and four-year-old Kalli, after Nanney’s return home from Vanderbilt Medical Center in Nashville.