BY DAVID FISHER
david@dresdenenterprise.com
DRESDEN (July 20) — Firefighters from two fire departments battled a blaze at an abandoned house near Dresden, but were unable to save the former dwelling.
According to Dresden Fire Chief Paul Hutcherson at approximately 8:17 a.m. Monday, July 20, 2020, Dresden firefighters were dispatched to a structure fire at an unoccupied residence located on Snake Hill Road.
Dresden firefighters arrived on the scene at 8:25 a.m. with two fire engines, a rescue truck and eight personnel. Despite a rapid response, the older wood-frame building was fully involved and had burned almost all the way to the ground by the time they arrived.
“We called on Sharon Fire Department for mutual aid to provide water and manpower,” Chief Hutcherson said. “Sharon supplied eight firefighters, two fire engines and a tanker.”
The house was too far gone by the time Dresden Fire Department was notified and the structure was a total loss, Chief Hutcherson stated.
However, he noted firefighters extinguished the flames that started to spread to a nearby field.
Although firefighters worked in 90-degree temperatures, plus the heat generated by the burning structure, there were no heat-related injuries.
Weakley County Sheriff’s deputies provided traffic control and Weakley County EMS emergency medical technicians were at the scene to provide assistance if needed.
Firefighters cleared the scene a couple of hours after their arrival.
“No one lived in the house and it didn’t have electricity hooked up to it,” Chief Hutcherson said. “The cause of the fire is still under investigation.” 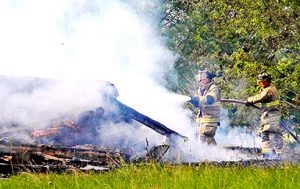