MARTIN (July 13) — Martin Police Department is investigating a shooting that resulted in a pregnant woman being airlifted to a Nashville hospital for treatment of a gunshot wound.
According to Martin Police Chief Don Teal, at approximately 6:14 p.m. Monday, July 13 Martin police officers were dispatched to 227 Meadowbrook Drive in reference to a medical call. While en route to the call, officers learned there was an individual at the scene with a firearm.
When officers arrived, they found the victim inside the residence bleeding from a gunshot wound, according to a press release issued by the MPD. The local woman was reportedly shot in the thigh, the affidavit notes.
Emergency medical personnel transported the victim from the scene by ambulance. She was later flown to Vanderbilt Medical Center in Nashville. Her status was unknown at press time.
Officers located 21-year-old Nicky Avent, Jr. of Martin outside the residence. The affidavit further notes Avent confessed to shooting the victim with a Tauras .380 pistol. According to the release, the alleged shooter was arrested without incident and charged with aggravated assault. Avent was also charged with possession of Schedule II.
The defendant is held in the Weakley County Detention Center awaiting arraignment.
Martin P.D. investigators responded to process the crime scene and interview witnesses. The investigation is ongoing. 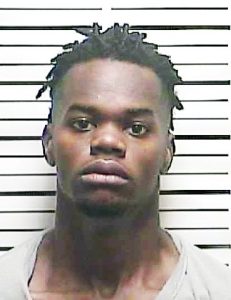