BY DAVID FISHER
david@dresdenenterprise.com
GLEASON (July 9) — During Thursday night’s Gleason City Board meeting, members voted to apply for a State Tourism Grant to fund the purchase of a replica giant sweet potato as a tourist attraction and to complete the caboose project.
Mayor Diane Poole stated a quote for the cost of the sweet potato is $5,000, plus another $681 to purchase the concrete needed for the base.
The grant, if approved, provides 90 percent of the $5,681 cost to purchase an eight-foot-tall sweet potato and base, leaving $568 (10 percent) to be provided by the City of Gleason.
Gleason, also known as Tater Town, is a major producer of sweet potatoes. For this reason, the sweet potato is a well-known symbol of the municipality.
The firm manufacturing the large spud crafted two scale models showing possible designs. One was a sweet potato man and the other a sweet potato woman.
Possible locations discussed for the giant sweet potato are at the end of Gleason City Hall’s parking lot or other nearby city-owned properties in the downtown area.
According to Charles Anderson, president of the Downtown Revitalization Committee, the cost for completing the ongoing railroad caboose project is estimated at $20,000.
“That would include exterior metal work, exterior windows, exterior paint, window replacement, floor replacement as needed, handicapped ramp and door, and wiring,” Anderson said. “That might not completely restore it, but it would get it in usable condition.”
Anderson stated the Downtown Revitalization Committee has $2,000 to cover the local 10 percent in matching funds required to acquire the $20,000 grant, so there will be no cost to the city.
The total amount requested for the tourism grant is $25,681, which requires a local match in the amount of $2,568. The City of Gleason will only be responsible for $568.
Anderson stated Gleason should receive notification whether or not it will be awarded the tourist grant within the next three months.
A motion to apply for the tourism grant was unanimously approved with all members present.
Alderman Jim Phelps reported the fence is completed at the city’s dog park, located at Huggins Park. “Poop stations and water stations have been delivered, but we’re waiting on benches and garbage cans,” Phelps said. “Once we get those items installed, the park can be used. After we get the bills for all of these items, we’ll look and see how much of the $25,000 grant money we have left to buy exercise equipment,” Phelps added. Gleason School colors will be incorporated into the design of the park. The fence is black and a sign will be orange with a Bulldog on it matching the school’s logo. “We also have a couple of small picnic tables we can put in there and paint orange,” Phelps added.
Mayor Poole said, “The city is seeking to obtain a park grant to purchase playground equipment, but it will probably be next year before it is approved.”
Police Chief Paul Eddlemon reported there were 24 state warrants issued during the past month with several of those felonies.
Before the meeting adjourned, Keith Priestley of McKenzie announced he is running for the 76th District seat in the Tennessee House of Representatives, and listed his qualifications.
The Gleason Board of Mayor and Aldermen will meet at 7 p.m. Thursday, August 13 in city hall. 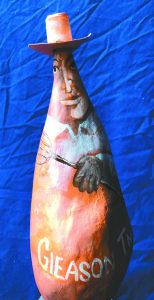 Scale models of possible designs for an eight-foot-high sweet potato to be erected in the City of Gleason were presented at Thursday night’s board meeting. The purpose of the giant sweet potato is to attract tourism, much like Paris, Tennessee, has a giant catfish on display. The board voted to submit an application for a state tourism grant, which, if approved, will fund 90 percent of the project.