BY DAVID FISHER
david@dresdenenterprise.com
DRESDEN (July 10) — Discussion during Friday morning’s meeting of the Finance, Ways and Means Committee centered on finalizing the Weakley County Budget for fiscal year 2020-2021, which includes no tax increase.
The total budget for FY 2020-21 is estimated at $60,459,302.
Based on the total real and personal assessed property values totaling $576,210,430, and a property tax rate of $1.9727 per $100 of assessed value, one cent of the tax levy amounts to $53,587 at a 93 percent collection rate.
A breakdown of the tax levy is as follows:
General Fund: $0.6632
Highway Fund: $0.1915
General Purpose School Fund = $0.6480
Debt Service: $0.47
Total = $1.9727
Commissioners determined the budget is sufficient to provide additional funding to cover a pay raise for Weakley County teachers. This was accomplished by the General Fund taking over the School Department’s debt service payment in the amount of $424,780 for capital projects such as HVAC, Adult Learning Center project and lighting upgrades in the system. This allows the school district to use these funds to increase teachers’ and administrators’ salaries. Director of Weakley County Schools Randy Frazier states teachers will receive an additional $2,000 added to their regular salaries. Frazier states the Weakley County School System is the lowest paying in the region. He states the main reason a teacher pay increase is needed is due to the large number of teachers leaving for other school systems, which pay an average of $3,500 to $4,000 more annually than Weakley County.
Other than step raises for Weakley County Sheriff’s Department officers and jailers, there are no other raises in the budget for General Fund employees.
Sheriff Mike Wilson said, “The budget is not as bad as I thought it might be.” He stated commissioners did a good job of developing a workable budget. “There were some small cuts, but nothing I don’t think that’s going to kill us.”
However, since the cost of living is only one-tenth of one percent more than the previous fiscal year, the lack of a raise is not expected to affect county employee’s spending power significantly.
The COVID–19 outbreak is a factor in estimating revenues, due to a downturn in local sales tax revenues.
A breakdown of Weakley County’s overall budget for the 2020-2021 fiscal year, as presented during Friday’s Finance, Ways and Means Committee meeting, is as follows:
General Fund:
Estimated revenues = $9,760,269
Estimated expenditures = $10,402,555
Expenditures exceed revenues by $642,286
The estimated fund balance, as of July 1, 2020, totals $2,408,987
The unassigned fund balance by June 30, 2021 is estimated at $1,766,701.
School Budget:
In the Weakley County School budget, total revenues are estimated at $32,594,524.
Total expenditures are projected at $33,050,597.
These figures indicate expenditures are expected to exceed revenues by $456,073.
The budget shows a beginning fund balance of $6,177,448, as of July 1, 2020, and an ending fund balance on June 30, 2021 totaling $5,721,375.
Debt Service Fund:
In the Debt Service Fund, estimated revenues in fund balance, as of July 1, 2020, total $3,493,456 and expenditures are projected at $2,774,519. The change in the ending fund balance, as of June 30, 2021, is projected to be $718,937, minus $21,242 in restricted funds set aside for the Everett-Stewart Regional Airport, leaving an accumulated final fund balance of $4,087,251.
After making line item adjustments within Weakley County Government’s various funds to reflect changes in revenues and expenditures, the revised budget was approved for submission to the full Weakley County Commission meeting on Thursday, July 30. 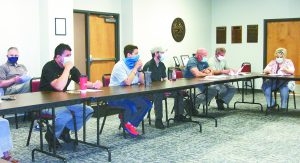