DRESDEN (July 6) — According to Dresden Mayor Jeff Washburn, Chris Crocker is serving as interim Police Chief, until a permanent replacement for former Police Chief Steve Howe is named. Howe recently resigned to accept a position with the Tennessee Office of Inspector General.
Chief Crocker has worked in law enforcement since June 2011. The 32-year-old law enforcement officer began his career with the Dresden Police Department, where he was employed for four-and-a-half years. During his time with Dresden P.D., he was promoted from sergeant to lieutenant. After, Crocker went to work for the Weakley County Sheriff’s Department for four-and-a-half years. He returned to Dresden P.D. approximately one year ago and assumed the role of Assistant Police Chief.
When asked what he likes most about his job, Chief Crocker said, “Getting to help people.”
Chief Crocker said the biggest factor in driving crime in the area is illegal drugs. “Ninety percent of the people we deal with are arrested for drug-related crimes. Most of the burglars are drug users trying to obtain drug money,” Crocker said.
He is the son of Steve and Anita Crocker of McKenzie. Although Crocker has resided in Weakley County the past 12 years, he grew up in Carroll County, where he attended West Carroll Jr. High and High School. 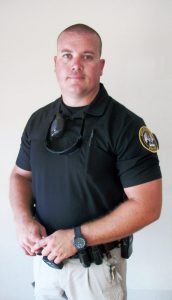