BUCHANAN (June 26) — A woman and two men are facing a multitude of charges including aggravated child abuse, animal cruelty, manufacturing marijuana, possession of firearms during the commission of a dangerous felony, and possession of drug paraphernalia after officers searched their home at 2465 Dale Cemetery Rd in Buchanan on June 25.
Arrested were Heather Scarbrough, 42, the mother of the child: her boyfriend, Thomas J. Brown, 46, and Thomas’ dad, Charles E. Brown, 82, all of the same address. All three are incarcerated on $300,000 bond each awaiting a Tuesday morning hearing in General Sessions Court. Charles faced additional charges of possession f a firearm by a convicted felon.
During a press conference on Friday, June 26, Sheriff Monte Belew said officers could not believe what they had encountered at the residence. They were summoned to the rural residence, near the Kentucky state line because of a report of possible animal cruelty. Sheriff Belew said when officers arrived, he personally looked in the single-wide mobile home and saw a 1.5-year old male toddler inside a 4-foot by 4-foot cage. He entered the home and saw eight pet snakes, all very near the toddler’s cage, dogs running throughout the house, empty pizza boxes on top of the boy’s cage, plus feces and food waste on the floor.
Every toy of the child was inside the cage, said Belew. It was evident that was his lone place to play.
A female deputy took custody of the child, changed his diaper and fed him prior to the Tennessee Department of Children’s Services arrival at the scene. Officers said the child welcomed the deputy’s attention to him.
The Sheriff’s Department was assisted at the scene by District Attorney Matt Stowe, Tennessee Wildlife Resources Agency, Department of Children’s Services, and Dr. Michael Neal, a veterinarian and his staff from the Paris Veterinary Clinic.
The following animals, in various states of health, were taken into custody: 56 dogs, 86 chickens, 10 rabbits, eight snakes, four parakeets, three cats, three sugar gliders, one pheasant, one gecko, and 531 mice, rats and hamsters.
Animal Rescue Corps, with 18 volunteers on the scene, took possession of the animals, except for the snakes, which are in the custody of TWRA, and the chickens, which the Sheriff’s Department has. ARC documented each animal with photographs when they took custody.
D.A. Stowe said each of the defendants, if convicted, are facing 15-25 years each on the aggravated child abuse charges plus sentencing for the other charges.
“We are in uncharted waters here,” said Stowe. A similar case was tried in Carroll County during a case called Noah’s Ark, in which numerous animals were in various states of health, including dead, at a home in Atwood. A child was also in that home that smelled of urine. 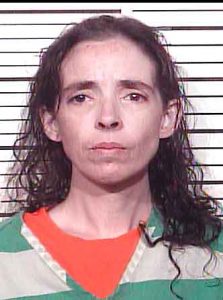 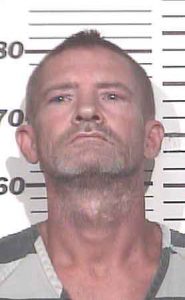 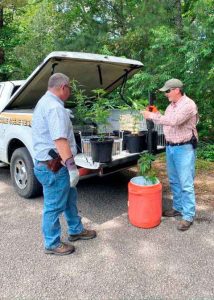 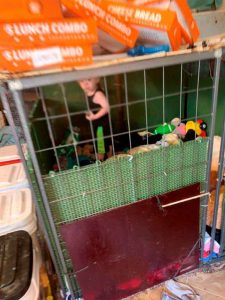 A 1.5-year old child was found in a cage (face intentionally blurred). He was adjacent to boxes of snakes. 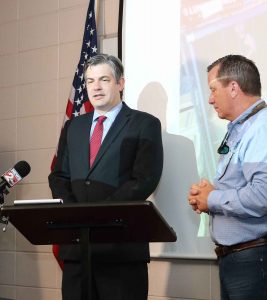