BY DAVID FISHER
david@dresdenenterprise.com
DRESDEN (June 24) — Dresden Police Chief Steve Howe recently resigned from his job with the City of Dresden to accept a position with the Tennessee Office of Inspector General (OIG).
A large part of Howe’s new job involves investigating TennCare and Medicaid fraud, plus any special investigations handed down by the governor.
“I have accepted a position with the Office of Inspector General (OIG) out of Nashville,” Howe said. “I will still get to serve in a law enforcement capacity in this district; it’s just under a different agency.
Chief Howe’s last official day on the job was Wednesday, June 24.
However, the OIG is allowing Howe to work as a liaison with the Dresden Police Department over the next couple of months, so the transition will go smoothly. He will help the interim chief and new chief with the daily activities and processes to make it an easy adjustment. During this time, Howe will continue to work out of the Dresden office in an on-call capacity.
“I will still reside in Martin, unless the agency asks me to move,” Howe said.
Officer Howe started working as an investigator for the Dresden Police Department in 2012, and was promoted to the office of Chief of Police in 2017.
“I feel privileged to have served the citizens of Dresden over the last eight years – four years as an investigator and four years as the chief,” Howe said.
Howe stated he is very fortunate to have such a good group of officers to work with. “They’ve made my job easy,” he said.
Howe expressed his appreciation to Mayor Jeff Washburn, the Dresden City Board, and the citizens of Dresden, for all of the support they gave him over the last couple of years as chief.
Mayor Washburn states he appointed 33-year-old Assistant Police Chief Chris Crocker to serve as interim police chief until a permanent replacement can be named. Crocker will perform all administrative duties and daily operations of the Dresden Police Department and oversee criminal investigations within the city.
“We’re going to take our time before appointing a new police chief,” Mayor Washburn said. “Officer Crocker is quite capable of serving as interim chief. He has significant experience in law enforcement and exhibits maturity. We’re looking for him to guide the Dresden Police Department until we decide what we’re going to do.”
Mayor Washburn says he anticipates appointing a new police chief in a couple of months.
Howe stated Interim Police Chief Chris Crocker is young and has a good work ethic. “He’s a go-getter. I think he will do well. I think he is up to the task. He has a good group of officers working under him.”
The Dresden Police Department has nine officers on the force, including the chief’s position.
“The Office of Inspector General has officers all over the State of Tennessee, but my main enforcement area will be a seven-county district in Northwest Tennessee, which includes Weakley County,” Howe said.
Howe states a training agent will work with him over the next 12 months and teach him the specifics of his new job with the OIG. This includes shadowing the training agent in the field and going over case files to see how things are done in the OIG’s office. “It’ll be a learning process for me,” Howe said. “It will be a side of law enforcement I haven’t spent a lot of time working in. I think it’s going to be exciting and challenging for me. I’m looking forward to it.”
“I have served on several violent crime and drug task force agencies during my first decade in law enforcement. During that time, I have worked as a member of the Drug Task Force in almost every county in West Tennessee.
Regarding his new job with the OIG, Howe said, “I’ll be investigating a “different set of crimes with a different set of people.” 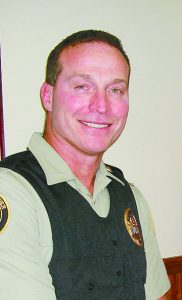 Dresden Police Chief Steve Howe resigned his position to accept a job as an investigator for Tennessee’s Office of Inspector General.