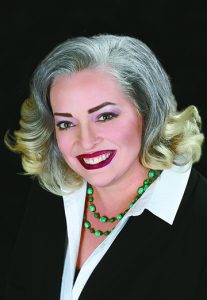 April Lieberman of Dresden is the new Rotary District 6760’s Governor for 2020-2021. Rotary District 6760 encompasses most of Middle and West Tennessee, with 61 clubs and over 3,500 community leaders. April is the fourth woman to serve in this role in the 106-year history of the District. She is one of 535 incoming district governors in over 200 countries who assumed office July 1 for Rotary International, representing 1.2 million Rotarians and over 35,000 Rotary clubs.
April is a member of the Dresden Rotary Club, which will be celebrating its 75th anniversary during her year. She is the first district governor from Weakley County, which includes the Rotary clubs of Dresden, Gleason, Greenfield and Martin. She is proud to follow in the footsteps of 40 years later the last District Governor from Northwest Tennessee, Ed Perkins, a 60-plus year member of the McKenzie Rotary Club, who served as district governor in 1980-81. April previously was a member of the Gleason Rotary Club (2013-2016), where she served as club president (2014-2015) and was honored as Rotarian of the Year in 2013.
In discussing her goals for the upcoming year, “Our theme from incoming RI President Holger Knaack of Germany is ‘Rotary Opens Opportunities.’ When my class left the International Assembly in San Diego in late January, we couldn’t have imagined how much the world would change in just a few short weeks. With the unprecedented needs presented by the COVID-19 pandemic, we also have great opportunities for service. I am challenging our Rotarians to find those community needs which are not currently being met, and pull resources together and rally to launch new club service projects. Whether organizing mobile food pantries, sponsoring medical equipment and protective gear, or supporting our frontline healthcare providers, I want our communities to know Rotary is there.”
“Another call to service for 2020-2021 will be for Rotarians to be peacebuilders in our communities. It is unacceptable for my friends to live in fear that their children might not come back home at night because they live in Black skin. I want Rotary to do what it does best and pull together community leaders to discuss these issues of racial injustice and help forge solutions.”
“We Rotarians can play a unique role. In Rotary, we welcome members of every race, gender, ability, sexual orientation and religion. We bring together community leaders of every background, creed, and ideology, putting our energies into championing those issues on which we can agree, one of which is Peacebuilding and Conflict Resolution. But peace isn’t just something that is needed in warzones overseas. I am challenging our members to be peacebuilders right here in our own town squares.”
“We Rotarians live by the ideal of the Four-Way Test of the things we think, say, and do–valuing truth fairness, and building goodwill and better friendships for the benefit of all. It is our charge to ensure that we not just as individuals, but collectively as a society, treat all with basic fairness. This is not a matter of politics; it is a matter of basic human rights.”
“We cannot have peace until we have equal justice for all. But to address the problem, we must admit the underlying truth—that Black Americans for too long have been systematically discriminated against and brutalized by our institutions. It is time for us White Americans to stand with our Black friends and neighbors and say ‘We’re not going to have this anymore.’”
“Anyone who feels that we all deserve fair treatment should come on over and join us in Rotary and be part of the solution. Anyone who feels helpless watching the devastating effects of this pandemic in the media, come join in the relief efforts in your community or start your own Rotary club to serve those most in need. We are People of Action, and we welcome you.”
April previously served D6760 as Assistant Governor, Public Image Coordinator, Social Media Chair, and Newsletter Editor. She is a Club Visioning Facilitator and a graduate of D6760’s Rotary Grad School and the Rotary Leadership Institute (RLI), for which she is also a Certified Facilitator. She represented D6760 at the 2016 Zones 30-31 Emerging Rotary Leaders Summit, bringing together Rotary leaders from the Great Lakes to the Gulf of Mexico. April was honored with the District’s All-Star Award in 2016-2017, the District Service Award in 2017-2018, and was named District Rotarian of the Year for 2018-2019.
April is a Yale Law graduate and former appellate attorney. She served as a federal judicial law clerk to the Honorable Rosemary Barkett of the U.S. Court of Appeals for the Eleventh Circuit and was admitted to practice before the District of Connecticut, the U.S. Court of Appeals for the Second and Eleventh Circuits, and the U.S. Supreme Court.
April was a member of the Class of 1987 of Gleason High School. After playing Division I college basketball at Austin Peay State University, she graduated summa cum laude and Phi Beta Kappa from Vanderbilt University in 1991 with an A.B. degree in Philosophy. She is a graduate of Leadership Weakley County and has served the county on the Election Commission.
April has two daughters, Tennessee, a student majoring in Middle Eastern Studies at Tel Aviv University in Israel, and Willie D, an undergraduate majoring in history at Emory University in Atlanta, Georgia.