By Jasmine Williams
enterprise@dresdenenterprise.com
MARTIN (June 19) — Residents from all over Weakley County came to Martin City Hall Friday evening to participate in a prayer, candlelight vigil, and reflection of the African American community. Many spoke at the vigil about what June 19 means to them and problems still faced by African Americans today.
The Weakley County Reconciliation Project (WCRP) sponsored this event. The vigil was used to commemorate Juneteenth and remember victims of racial injustice and police brutality.
June 19 is known as Freedom Day or Juneteenth and is a day to celebrate the reading of the Emancipation Proclamation to the last enslaved African Americans in Texas in 1865. It’s a day used to recognize successes, reflect on hardships, and look to the future of race relations in the nation.
In a press release by the WCRP, they said, “Today, racial inequalities and injustice still exist for African Americans through racial profiling, police brutality, racist comments, and unjustified brutal killings of black men, women, and youth, referred to as modern-day lynching’s.”
Joyce Washington, co-chair of WCRP, spoke about the vigil and having conversations about racism, “It’s not about changing minds or making people feel bad or feel guilty. But it is about being able to acknowledge the contribution of African Americans to this country.”
The vigil started with a welcoming message by Joyce Washington. She spoke on why Juneteenth is important and how the acknowledgment of racism is still important in 2020. Her speech was followed by a prayer lead by Pastor Cowley McCabe.
Austin Ferrell followed on why Juneteenth must be understood and known by everyone. He said the country is starting to understand what Juneteenth means and that there is still a long way to go.
DeAndria Meredith with the UTM’s Black Student Association gave an emotional speech about the struggles African American’s face every day. “Being pulled over for something as simple as a speeding ticket, not knowing if this is the last time that I’m gonna be alive. Am I gonna be the next hashtag? Will there be a protest in my name and honor?” She continued to say that people of every color should not be afraid to speak out against racist comments and actions.
Jessica Neloms followed with her story of being treated unfairly based on her skin color and hair. Neloms used to work at a restaurant in Martin and there wore her hair in an afro for 80s day. Management soon told that her hair looked unkempt, messy, and sent home. Neloms said many women face being discriminated against due to their natural hairstyles.
Pastor Amanda from the Weasley College of Ministry at UT-Martin led the vigil for lighting candles.
After a moment of silence for 8:46 to remember George Floyd, Trinity Presy read a George Pasley poem titled Courage.
Many attendees of the vigil expressed gratitude for the WCRP that hosted the vigil. Journey Turner, a local grandmother, brought her granddaughter Nilay McAfee to the vigil. Turner commented on why it is so important for youths to be active for racial change and justice, “This is something new for them and this is to show her (granddaughter) history.”
UT-Martin Chancellor Keith Carver attended with his wife. He said having peaceful ways to raise awareness of injustices in the world today was very important.
All who attended the vigil were given masks and hand sanitizer to use at their discretion. 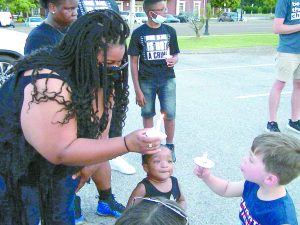 A woman holds out her candle to light a boy’s candle. 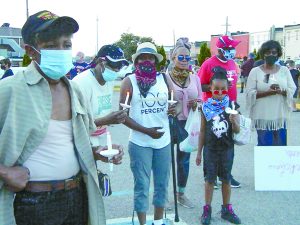 Residents held candles in Martin to remember the many people who were lost due to racist actions.