BY DAVID FISHER
david@dresdenenterprise.com
OBION COUNTY (June 22) — Martin firefighters provided mutual aid to help extinguish a blaze in Obion County Monday night.
According to Martin Fire Chief Jamie Summers, at approximately 11:45 p.m. on June 22, the Martin Fire Department was dispatched to 9317 McConnell Road (Hwy 190), which is located in South Fulton’s fire district.
Chief Summers states his department responded with eight personnel and two firefighting apparatuses.
When firefighters arrived on the scene, they discovered a camper trailer was ablaze.
Chief Summers said three nearby propane tanks were cooled with water to prevent them from exploding.
The trailer was a total loss. No one was injured in the fire.
Martin firefighters cleared the scene and returned to their station at approximately 12:30 a.m. 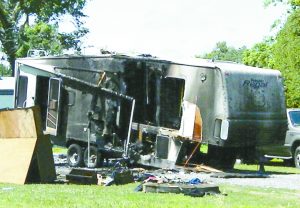