GREENFIELD (June 18) — The Greenfield High School Yellowjackets football team is now practicing with more than ten people. This change is part of phase two of summer practices. It allows up to 50 people to attend outdoor practices.
Head Coach Don Pitt spoke to The Enterprise about how the team is practicing and what the coaching staff is doing to protect the health of their athletes.
As phase two allows 50 people to be outside, the Jackets are currently looking at their offense, defense and passing. This focus on plays is to allow new players to learn what will be expected in the upcoming season.
Pitt said that after the dead period, the team will be preparing for the upcoming 7-on-7 games. The first 7-on-7 games for Greenfield will be played at Jackson and Paducah in the coming weeks.
Even with all the changes to summer practices, Greenfield is expecting to do well this season. Pitt noted that players have been working hard, noting that some on the team are working out at home. However, other players are not in the same physical shape compared to last year. But, Pitt said, the Jackets are still on track to be in the same condition at the start of the season.
For student health, the coaching staff is still making cleaning a priority, cleaning workout equipment and footballs used during practices. Throughout the upcoming season, Greenfield will be following all cleaning guidelines. Pitt said, “We are trying to follow the guidelines as closely as we can, to try and keep everyone safe.”
The upcoming dead period starts on June 28 and lasts until July 11. During that time, there is no practice of any kind, including team meetings and weightlifting. 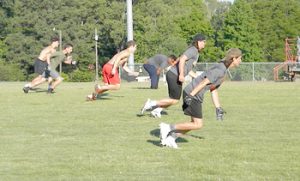 Members of the Greenfield High School football team run a play as part of exercises for the upcoming season. 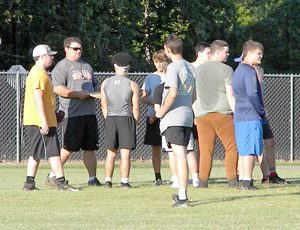