The McKenzie Rotary Club along with Rotary Clubs from Weakley County partnered with the volunteers from the Trezevant Ministerial Alliance on Friday and Gleason First Baptist Church on Saturday for a mobile food pantry. Rotarian Joe Neumair and his wife, Melanie, chaired that event.
Over 150 families were fed from the event on Friday with the food distribution center at the Trezevant Fire Station. With a large amount of food remaining, the McKenzie Rotary Club with the help of The McKenzie Banner Staff delivered food to the Housing Authority in McKenzie.
For the second time within a month, the Gleason food pantry was based at the Gleason First Baptist Church and operated like a well-oiled machine. Some of the excess perishables were distributed within the Gleason Housing Authority. An estimated 256 households, 730 people and six daycares were provided food. Neumair stated, “we had so much extra milk, we ended up calling them (daycares) to see if they could use it and delivered the milk to them. Melanie and I appreciate The Rotary Foundation’s grant and all the help we received.”
Rotary District 6760 was the beneficiary of a $25,000 COVID Disaster Relief Grant. District leadership partnered with Mid-South Second Harvest Food Banks funding 15 Mobile Food Pantries West and Middle Tennessee. It is estimated 25,000 people will receive the food provided by the grant from The Rotary Foundation. Jennifer Barker assisted Rotary 6760 set up the mobile food pantry. 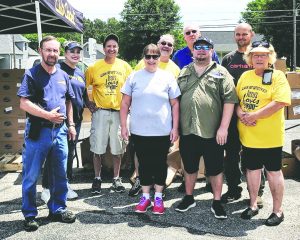 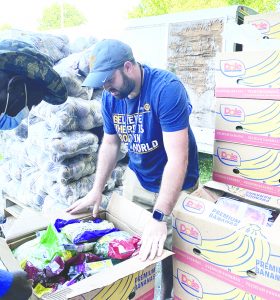 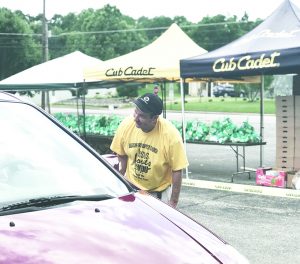 Food is sorted into boxes.