BY DAVID FISHER
david@dresdenenterprise.com
DRESDEN (June 4) — The Weakley County School Board considered several important issues, during Thursday night’s virtual meeting via the internet.
Board members unanimously approved the first reading of a suicide policy, as mandated by the state.
According to Director of Schools Randy Frazier, there is no guidance in place regarding how to deal with the problem. To help alleviate the situation, all Tennessee school systems are required to approve a new Student Suicide Prevention/Intervention/Postvention Policy.
The policy states faculty and staff are expected to be proactive in maintaining a safe and supportive learning environment and to immediately report to the building principal any indications that a student might be in danger of harming himself or herself or others.
The policy stipulates all district employees must attend either an annual in-service training in suicide prevention at the building level or participate in other equivalent training approved by the director of schools. This training must be compliant with Tennessee law. The training shall include, but not be limited to, identification of risk factors, warning signs, intervention and response procedures, referrals, and postvention strategies.
In other board action, members approved the first reading of a revised School Board Policy dealing with the student dress code. The amended dress code allows students to wear spirit wear (sweatshirts, t-shirts or other team, club, or school extracurricular activity items), providing it is approved by the school.
Other changes include striking the wording “Students shall wear shirts tucked in at all times.” The dress code regarding shirts stipulates, “No skin may show between the shirt and pants in any position.”
The statement “Belts are to be worn on pants which have loops” is removed from the policy.
In other business, board members voted unanimously to renew the director of school’s contract. School Board Chairman Steve Vantrease stated Frazier continues to demonstrate outstanding leadership and deserves to be rewarded for his efforts. Vantrease remarked Frazier scored 4.84 out of a possible 5.0 rating. Following an affirmative vote, Vantrease stated the board’s action extends Frazier’s contract to four years, which is the maximum allowed under Tennessee law.
A budget resolution reallocating $118,392 to pay the salaries and benefits of 60 cafeteria staff for the extra time they worked feeding the students during school closures due to the Covid-19 pandemic was approved. Frazier commented these employees served 1,400 to 1,800 meals to children per day and have provided over 250,000 meals since the program was initiated.
A federal resolution authorizing amendments to the School Federal Projects Fund for the fiscal year ending June 30, 2020 also received board approval. The resolution budgets $10,000 received from a 2019-2020 IDEA Technology Partnership Grant. A total of $8,857 of the grant money is earmarked for the purchase of special education equipment and the remaining $1,143 is designated to buy instructional equipment. Money was also moved from with less-than-expected expenditures to purchase new Career and Technical Education (CTE) equipment. These funds are used in accordance with the provisions of the No Child Left Behind Act. The federal projects fund involves only federal monies and no local tax dollars.
The board voted to hire Kenneth Irvine as a volunteer football coach at Martin Middle School and Scott Hewett as a volunteer football coach at Dresden Middle School.
Frazier stated, after various options were explored, the principals and planning committees of Dresden, Gleason, Greenfield, and Westview High Schools solidified plans for this year’s graduation ceremonies. He notes Westview will use the University of Tennessee’s Hardy Graham Stadium at 8 p.m. on June 12. In case of inclement weather, Westview is prepared to move to the gymnasium with half of the graduates (Abbott -King) participating on Friday and the other half (Lancaster-Zelenski) observing their ceremony on Saturday at 1:00 p.m. Dresden, Greenfield and Gleason are recognizing their seniors at 7 p.m. June 12 in their respective high school gymnasiums. A limited number of tickets are available for visitors attending the events at these three schools.
Despite possible state cuts in funding for teachers, Frazier said he plans to move forward with pay raises for teachers. He remarked Weakley County has lost 64 teachers, thus far, due to educators accepting higher paying positions in other school systems.
Frazier announced a called school board meeting to review the budget for fiscal year 2020-2021 will be announced at a later date for either June 15 or 16. 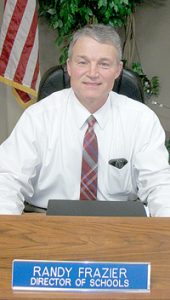 The School Board extended Director of Weakley County Schools Randy Frazier’s contract an additional year which gives him a total of four years.