Victoria Diane Galey and Nathan David Smith announce their upcoming wedding, Saturday, June 20, 2020 at White Oak Farms in Medina, Tennessee. Music begins at 5 p.m.
The bride-elect is the daughter of Roger and Vicki Galey of Greenfield. Victoria is the granddaughter of Velma McBride and the late Stanley McBride of Henry and Herbert and Betty Galey of Bradford.
The groom-elect is the son of David and Sherry Smith of McKenzie. Nathan is the grandson of the late James and Shirley Lankford of Henry and William and Ivy Smith of McKenzie and the late Peggy Smith.
Victoria and Nathan are both graduates of The University of Tennessee at Martin and have been accepted to continue their education at The University of Tennessee Health Science Center in Memphis. Victoria enters the Pharmacy Program in the fall, and Nathan begins the Occupational Therapy Program in the spring.
Everyone is cordially invited to attend with reception to follow. 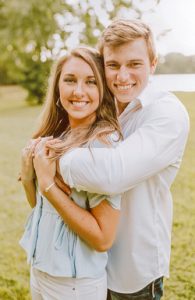