BY DAVID FISHER
david@dresdenenterprise.com
DRESDEN (June 9) — The Dresden Municipal/Regional Planning Commission approved a site plan for a building addition at an existing industry, during Tuesday’s noon meeting at Dresden City Hall.
Volunteer Distributing Company, located at 1 Volunteer Place on Hwy. 22 in Dresden, submitted a site plan, which proposes two additions to their existing 19,000 sq. ft. facility. The building additions are approximately 8,000 sq. ft. and 950 sq. ft. in size. The enlarged building will occupy 27,950 sq. ft. of floor space. The added space will be utilized for warehousing.
According to Donny Bunton, Community Planner with Northwest Tennessee Development District, the property is zoned M-1 (Light Industrial) and is not located in a designated flood hazard area.
Mike Gardner with MG Construction presented detailed construction blueprints of the proposed site and stood ready to answer any questions regarding the project.
During discussion, Bunton stated all of his concerns regarding the site plan and recommended it be approved.
After hearing from Bunton, the board voted unanimously to approve the site plan.
Volunteer Distributing Company primarily operates in the beer and other fermented malt liquors business industry within the wholesale trade – nondurable goods sector. Volunteer Distributing has been in operation for approximately 57 years and generates over $6.5 million in annual revenues. The local company employs approximately 35 people at this single location. Tennessee Gov. Ned Ray McWherter purchased the business in 1962 and moved it to Dresden in 1963. At that time, he had two employees. Gov. McWherter later constructed a new building on Hwy. 22 near the intersection of Pikeview Street and donated the old building to Weakley County Government to provide office space for the Weakley County’s school and finance departments.
The company is owned by Gov. McWherter’s son, Mike McWherter, who serves as president of Volunteer Distributors in Dresden and Central Distributors in Jackson. Mike is also the equity agreement manager for both operations. Randy Gregory is the general manager overseeing day-to-day operations at the Dresden plant.
McWherter states the extra space is needed at the Dresden facility to warehouse a wide assortment of new non-malt beverage products.
“We’ve gotten to the point where we had to add on,” McWherter said. “We’re also adding loading docks to accommodate incoming freight more easily.”
McWherter noted the larger addition will be constructed on the west side of the existing structure and utilized for additional warehousing. The smaller addition will be built on the east side of the current building, and will be used for storing shipping pallets and empty kegs to be shipped back to the respective suppliers.
The Dresden location services Weakley, Obion, Henry, Carroll and Benton counties.
According to McWherter, none of his employees or their families have contracted the coronavirus, so far, and everything is running smoothly.
In other business, City Recorder Jennifer Branscum informed the board the City of Dresden is awarded a Complete Street Plan grant from TDOT up to $125,000. She stated the grant requires a 10 percent match in local funds. 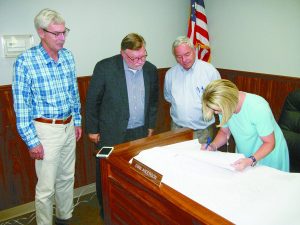