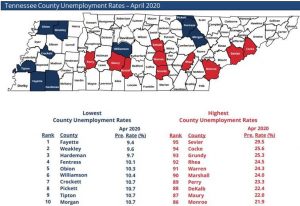 NASHVILLE (May 28) — Statistics released by the Tennessee Department of Labor and Workforce Development show a staggering increase in unemployment for each of Tennessee’s 95 counties in April as many businesses closed to help slow the spread of COVID-19.
The unprecedented and historic spike in unemployment affected some counties more drastically than others, but no area of Tennessee escaped the pandemic’s effect on the state’s workforce.
Statewide, unemployment reached a historic high in April. The seasonally adjusted rate of 14.7 percent surpassed the previous all-time high figure of 12.9 percent in January 1983.
Fayette County had Tennessee’s lowest unemployment rate in April. At 9.4 percent, the county’s rate increased by 6.1 percentage points when compared to its revised March rate of 3.3 percent.
Weakley County had the second-lowest unemployment rate for the month at 9.6 percent, followed by Hardeman County at 9.7 percent.
Fayette, Weakley and Hardeman were the only counties in the state with unemployment rates below 10 percent in April.
Sevier County recorded Tennessee’s highest unemployment rate for the month. The county’s new jobless figure of 29.5 percent represents a spike of 26 percentage points when compared to its revised March rate of 3.5 percent.
When comparing Tennessee’s three largest cities, Nashville had the highest unemployment rate in April. The city’s rate of 15.9 percent is a 13.5 percentage point increase over its revised March rate of 2.4 percent. Memphis recorded a rate of 14.3 percent, a spike of 10.1 percentage points from the previous month, and Knoxville’s April rate of 14.7 percent is an 11.8 percentage point jump.
At 9.6 percent, Weakley County’s unemployment rate during April represents a 3.2 percent increase from the previous month’s rate of 6.4 percent. It was 5.1 percent lower than the national and state rates, which both recorded 14.7 percent unemployment. Out of a total countywide labor force of 14,661 workers, 13,255 Weakley County citizens were employed and 1,406 were unemployed.
In counties bordering on Weakley, Obion County recorded an unemployment rate of 10.7 percent for the month of April, up 4.3 percent from the previous month.
Gibson County’s jobless rate of 12.1 percent for April represents an increase of 3.8 percent from March’s rate of 8.3 percent.
At 13.9 percent unemployment, Carroll County’s jobless rate during April represents an increase of 4.5 percent over the previous month’s rate of 9.4 percent.
Henry County registered 14.7 percent unemployment, which is up 4.3 percent above the previous month’s rate of 10.4 percent.
In neighboring Madison County, unemployment was 14.5 percent, an increase of 3.2 percent.
The Northwest Tennessee Economic and Community Development Region, which includes the counties of: Benton, Carroll, Crockett, Dyer, Gibson, Henry, Lake, Obion and Weakley, registered an average of 12.6 percent unemployment for the month of April. This represents an overall increase of 4.1 percent from the previous month’s rate of 8.5 percent. During April, this region of the state had a combined labor force of 104,418. Of this number, 91,295 were employed and 13,123 remained unemployed. Historically, the jobless rate in the Northwest Tennessee region is higher than any other region of the state. However, it had the lowest unemployment rate of any region in Tennessee for the month of April.
At 19.7 percent, Northern Middle Tennessee recorded the highest jobless rate in the state.
Total non-farm employment in Tennessee decreased by 376,900 jobs between March and April. The largest decreases occurred in leisure/hospitality, manufacturing, and professional/business services sectors.
Over the last 12 months, non-farm employment decreased by 341,000 jobs. Like the month-to-month data, the largest decreases for the year occurred in the leisure/hospitality, manufacturing, and professional/business services sectors.
Tennesseans searching from new employment are invited to view the state’s workforce development website, www.Jobs4TN.gov. The site also has information about job retraining opportunities, interviews, resume techniques, and local job data.