WEAKLEY COUNTY — According to Captain Randall McGowan, investigator for the Weakley County Sheriff’s Department, on Wednesday, May 27, shortly before 8:30 p.m. in the 1500 block of Union Church Road in the McKenzie area, 18-year-old Canon Magourik was shot at least seven times by what was described to investigators as two black males driving some type of sport utility vehicle.
Magourik was taken by Weakley County’s Emergency Medical Services to the Jackson General Hospital and then was airlifted to a Nashville hospital.
The United States Marshal’s Service, along with police from numerous other agencies, assisted the Weakley Country Sheriff’s Department in the search for one of the alleged perpetrators, leading to an arrest on Friday.
18-year-old Malcolm Lee, Jr., believed to be a McKenzie resident, was taken into custody shortly after noon on the attempted murder charge, following a traffic stop by officers in McEwen, Tennessee. McEwen is located in Humphries County between Waverly and Dickson.
United States Marshals obtained information about a vehicle that the suspect was driving after he fled from a house in Martin, and a “be on the lookout” was issued to law enforcement. The traffic stop occurred about 30 minutes later.
The case is still under investigation and two other people been charged.
20-year-old Mary Beth Lyles of Martin has been charged by investigators from the sheriff’s department with filing a false report after she lied to a U.S. Marshal and made a phone call warning Malcolm Lee.
22-year-old Katie N. Smith of Martin is being charged by sheriff’s investigators with accessory after the fact after she obtained the vehicle that Mr. Lee was caught in and she was in the car with him when he was caught.
Captain McGowan notes that there may be more people charged as the investigation continues.
As of Friday, Magourik remains in the hospital in critical but stable condition. 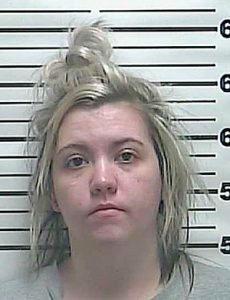