BY DAVID FISHER
david@dresdenenterprise.com
DRESDEN (May 31) — Sunday, May 31, marked the 50th anniversary Dresden’s own Goodtime Singers quartet began singing gospel music.
The group’s long and storied career took them to venues near and far.
Three members of group sang together in Dresden High School’s chorus, which influenced their forming a singing group, along with the encouragement from their home church, First Baptist in Dresden.
The local gospel quartet, originally named The Wayfarers in 1970, was composed of Marshall Anderson, Rick Finney, Tommy Moore and Tom Butts, who also played the guitar for the group.
Jim Tice, a youth director and music director at First Baptist Church in Dresden, played a key role in forming the group. He now lives in Fairview, Tenn.
“We would also go over to James Pritchett’s house,” Moore said. “His wife, Sue Ellen Pritchett, was a piano teacher. She was part of a singing family. She worked with us on harmony around the piano. Carol Hutcherson, mother of Dickie Hutcherson, found songs for us, including “God is Love,” which is no longer in print. It has great four-part harmony. We put it together with the song “The Love of God.”
Finney states the first song the church friends sang at First Baptist was “We Three Kings” during a church Christmas service in 1969, and that motivated them to start a gospel quartet.
After a few years singing at local and area churches as The Wayfarers, they changed the name of the group to The Goodtime Singers in 1973. The group is composed of lead singer Marshall Anderson; Ricky Finney, who sings bass; Tommy Moore, sings tenor or baritone; and Robert Nanney, who sings tenor or baritone, depending on what part Moore sings.
According to Moore, the first song the group sang was “Peace in the Valley” with Nanney playing the guitar. They added more gospel songs to the list of hymns and expanded the number of appearances they made at other churches.
“The first time we ever sang outside of our church, on May 31, 1970, was at Grove Hill Methodist Church located north of Dresden,” Moore said. “We asked Robert to sing with us because he could play the guitar. Tom wasn’t available that Sunday. We also sang at a lot at homecomings, fifth Sunday night singings, funerals and weddings.”
Since their early beginnings, the Goodtime Singers sang at Opryland in Nashville in the summer of 1973 after winning a talent show at a McKenzie radio station.
Nanney and Moore sing in the Tennessee Baptist Men’s Chorale, which is comprised of men who serve as music ministers, worship leaders, or worship pastors in Tennessee Baptist churches. Because of Judge Moore’s involvement in the Men’s Chorale, he had the opportunity to travel to Wales and Italy to sing. In October of this year, Moore, Nanney and other members of the Men’s Chorale are going to the Republic of Guatemala in Central America. Through an acquaintance in the Men’s Chorale, Moore and Nanney got to sing with a big choir at Carnegie Hall a couple of years ago.
“When you start, it often leads to other opportunities. We all love music and we continue to sing in our church. Marshall, Robert and I have all been music directors in churches,” Moore said.
Judge Moore has played the piano at First Baptist for approximately 40 years. Robert serves as music director at the church.
Over the years, Finney has sung with the Goodtime Singers and professionally with other groups.
Judge Moore, Ricky Finney and Robert Nanney have also sung together with the David Johnson Chorus.
“It all started with our love of music,” Moore said. He stated the group came together due to their “enjoyment of singing harmony, the hearing of harmony and enjoying learning how to sing it. Everything else is an extension of that.
“The positive feedback and encouragement we’ve always received from people in the community caused us to continue,” he said.
“We’re not professional in the sense that some groups are, but we love it and enjoy it, and appreciate the audiences being so kind.”
“Ricky’s son, Lowe Finney, sang with a professional group two or three years and traveled all over the country with them,” Moore said. “So, it has continued for another generation. My son, Josh, sings for us when someone else can’t be there. Robert’s son, Ryan, who sings and plays the guitar, sang with a popular country music group that toured the country.
“It’s really been a great experience and we remain great friends throughout it all,” he added.
The quartet sang a couple of hymns at Dresden First Baptist Sunday to mark the group’s 50th anniversary.
“I hope we’ve brought honor to God in our music,” Finney said.
“What an honor and joy it has been to sing all these years with these fine men that I consider my brothers. Through it all, God has blessed us with the opportunity to serve, and that’s what continues to matter most to us, most,” Nanney said.
Anderson, who is the eldest member of the group and whom the others consider as their “big brother” mentor and spokesman for the group, summed it up well.
“It has certainly been a blessing to sing with these guys and I’ve always appreciated the fact that while we have taken the opportunity to minister through music seriously, we just haven’t taken ourselves as a group all that seriously,” Anderson said. “We’ve never aspired to any kind of greatness. We all have other vocations and ministry, and that has pretty much kept us grounded. It’s just been good to be used by the Lord as we’re needed in our area and church.”
Judge Moore says The Goodtime Singers are slated to be the featured group at a gospel singing at his church August 7.
When asked how he feels about singing with the group, Judge Moore replied, “It’s been a treat. It’s a wonderful thing. We hope to continue for another 50 years.” 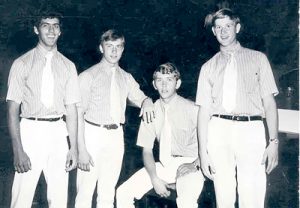 THE ‘WAYFARERS’ — This photo was taken in the spring of 1970, when the group began as The Wayfarers Quartet, after placing in the Weakley County Fair Talent Contest. They are (L to R): Rick Finney, Tommy Moore, Marshall Anderson and Robert Nanney. The name changed to The Goodtime Singers in 1973. 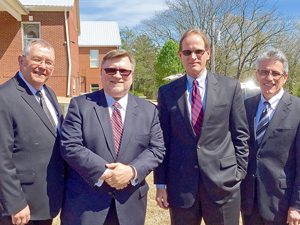 ONE OF MANY FUNERALS — The quartet has sung at hundreds of funerals in the area during the last 50 years. This photo was taken after a local funeral in 2016. 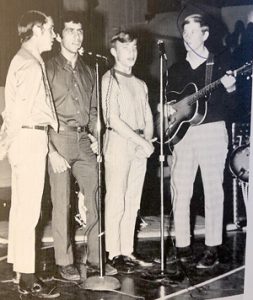 AT DRESDEN HIGH SCHOOL — In the fall of 1970 the group sang at the Dresden High School Beta Initiation. They are (from left) Marshall Anderson, Rick Finney, Tommy Moore and Robert Nanney.