The City of Dresden has a new art mural in the city located at the end of the Dresden walking trail where the railroad tracks used to go through. The mural was painted by Dresden High School alumni and UTM student Clay Palmer.
This mural was paid in part with the Arts Build Communities (ABC) grant. This grant paid half of the cost of the mural and the city paid the other half. This grant has also paid for track lighting located at the Dresden City Hall.
This is currently the third mural within the Dresden city limits with the other two being located at Wilson Park and on Jefferson Street near the Farmers Market. There are currently no other murals in the works for Dresden but the city hopes to apply for the ABC grant again once it opens applications. 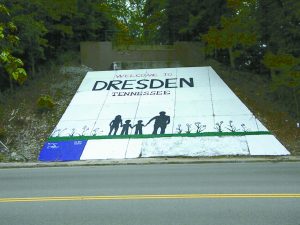