By Brad Sam
brad@mckenziebanner.com
© 2020 Tri-County Pub., Inc.
DRESDEN (May 21) — Dresden High School basketball standout Rachel Childress will continue her academic and athletic career at Bethel University as a member of the Lady Wildcat basketball team.
She made it official Thursday with a signing ceremony held in front of the high school.
At the event, Childress was also presented with a commemorative ball marking her 1,000th point, scored during the Lady Lions’ February 11 game against Fulton City. Childress finished with 1,055 total points in her high school career.
Lady Lion Head Coach Jonathan West told The Banner, “She’s a great kid and a hard worker. She really developed throughout her career.” He said that she began with lots of potential and “spent a ton of time in the gym in order to become one of the best players in the area.”
West said that her transition this season from a wing player to a point guard benefited the team. “[Opponents] couldn’t keep her out of the paint.”
Bethel Head Coach Chris Nelson told The Banner he loves having local players and that a winning program like Dresden has been great for them in recent years. He said of Childress, “I’ve been impressed with the way she attacks and doesn’t back down as well as her ball-handling skills.”
Childress told The Banner she chose Bethel because of the camps she has attended there for years. “I’m excited to play there, it’ll be really fun.”
She said of her time as a Lady Lion, “It started as a sport, but it turned into a family. They’re always there for you.”
Childress will major in Health and Human Performance. 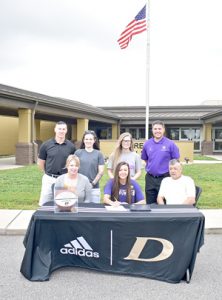