BY DAVID FISHER
david@dresdenenterprise.com
DRESDEN (May 18) — Weakley County’s new Veterans Service Officer started work Monday after his predecessor left the position last week.
Randi Storye, administrative assistant at the Weakley County Veterans Service Office, said “The Weakley County Veterans Affairs office would like to announce Ricky Cobb as the new county service officer, starting today, Monday, May 18. He replaces Rick McKenzie, who retired from the position on Friday, May 15.”
She noted Cobb is an 18-year veteran of the Army / TN Army National Guard. “He was deployed to Iraq as a sergeant in support of Operation Iraqi Freedom.”
Cobb’s law enforcement career began with the Weakley County Sheriff’s Department, where he worked for 12 years. This was followed by 20 years with the Dresden Police Department, where he served as assistant police chief. And most recently, he was chief of police at Sharon Police Department. He retired from law enforcement on April 30, 2020, after 35 years of service.
“It was time to make a change,” Cobb said. He mentioned that outgoing VA officer Rick McKenzie spoke to him about taking the position before he considered the job.
Cobb stated he is looking forward to helping and serving the veterans and their dependents of our area with any issues they may have.
“Once I get acclimated to it, it’ll be alright,” Cobb said.
Ricky and his wife reside in Martin. 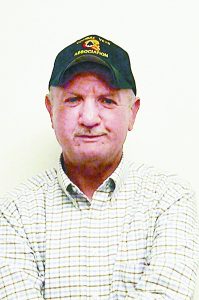