GREENEVILLE, Tenn. —Tusculum University named Meagan Price as the 16th head women’s basketball coach in program history announced Doug Jones, vice president of athletics and university initiatives.
Price comes to Tusculum after serving as assistant women’s basketball coach at Bethel University in McKenzie for the past two seasons.
Price has prior head coaching experience, having compiled a 38-16 record in two years at Hiwassee College, and was an assistant coach for five years at Truett-McConnell University in Cleveland, Georgia which included stints as head junior varsity coach and interim head coach.
“We are thrilled that Coach Price has agreed to lead our women’s basketball program,” Jones said. “Meagan has helped build and maintain winning programs throughout her coaching career. She is committed to supporting student-athlete in all aspects of their lives, helping them thrive academically, athletically and personally, and she has a clear vision to contribute to the winning and successful tradition of Tusculum women’s basketball.”
Price, a native of Gleason, Tennessee, began her collegiate basketball career at Bethel and played two seasons before transferring to Missouri Baptist University for her final two seasons.
Following her graduation from Missouri Baptist in 2011, Price was hired as assistant coach at Truett-McConnell. She helped the Bears increase their win total to 14 in her final season before accepting the head coaching job at Hiwassee in the spring of 2016.
At Hiwassee, Price took over a team that had won six games in 2015-16 and led them to 18 victories and a NCCAA Division I top-10 national ranking for the first time in school history.
In 2017-18, Price guided the Tigers to the NCCAA Mideast Region championship and a berth in the NCCAA Division I national championship tournament.
Hiwassee finished the year with 20 wins and sixth in the nation, with Price earning Mideast Region Coach of the Year honors and a nomination for National Coach of the Year.
Following the 2017-18 campaign, Price returned to Bethel as an assistant to longtime head coach Chris Nelson. In her first season, the Wildcats went 28-6 overall and 18-2 in the Southern States Athletic Conference, earning a trip to the NAIA Division I Women’s Basketball tournament. This past season, the Wildcats finished 29-4 and won both the SSAC regular season and conference championship, and would have made their eighth straight trip to the NAIA Tournament before it was cancelled.
“I am thrilled for the future of Tusculum women’s basketball and am looking forward to continuing to establish a culture of excellence that prepares our players for success in academics, on the court, and in life,” said Price. “I am also excited to serve and engage the Pioneer community as well as the East Tennessee area.”
Price earned a bachelor’s degree in English with a writing certification from Missouri Baptist in 2011, and a master’s degree in science in sport management in 2014. She is working toward a Ph.D. in leadership and sports administration from Concordia University in Chicago. 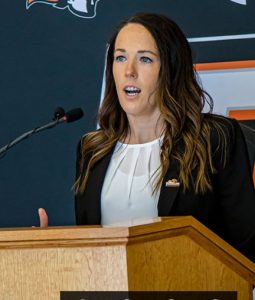