WEAKLEY COUNTY (May 11) — A Sharon woman involved in a single-vehicle accident this week narrowly escaped serious injuries.
According to official reports, the accident took place at approximately 2:46 p.m. on Monday, May 11, on Sidonia Road near the intersection of Lewis Taylor Road.
A Tennessee Highway Patrol report states a 2005 Ford Escape, driven by 54-year-old Charlene M. Thompson, of 132 Thompson Road in Sharon, Tennessee, was traveling east on Sidonia Road, when she failed to negotiate a left curve, exited the roadway, and traveled into a ditch. The vehicle then hit a mailbox and struck a culvert, causing it to overturn. The Ford Escape came to a final rest in a driveway, partially in the road.
When emergency medical personnel arrived at the scene, they discovered the driver inside the vehicle, who was the sole occupant. Thompson managed to get out of the car. Her only visible injury was a cut on her hand.
The victim was transported from the scene to the West Tennessee Health Care Volunteer Hospital in Martin by Weakley County EMS to have her medical condition evaluated.
The driver was wearing a seatbelt at the time of the accident, which may have saved her life.
In addition to the Tennessee Highway Patrol, agencies assisting in working the scene of the accident included personnel from: Weakley County EMS; Sharon Fire Department, which responded with five firefighters and a rescue truck; Weakley County Sheriffs Department; and Sharon Police Department.
All emergency personnel cleared the scene by 4:32 p.m.
THP Sgt. Jena Eubanks, Special Programs, 8th District, tells our readers, “Please buckle up, don’t drive distracted and drive sober.” 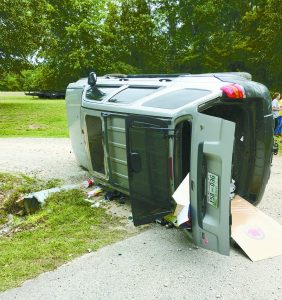 A Sharon woman had a close call on Monday, when her 2005 Ford Escape overturned in a curve in rural Weakley County.